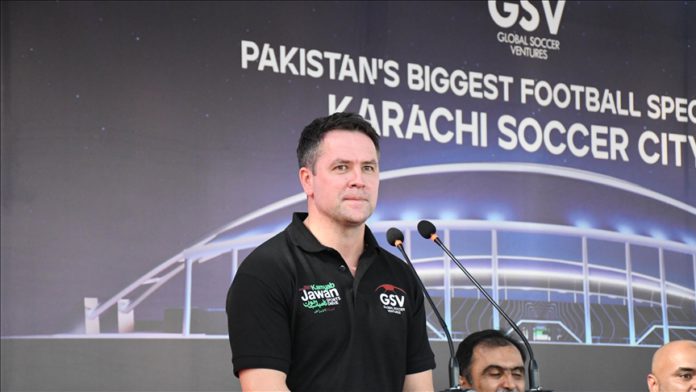 English football legend Michael Owen laid the foundation of a football stadium on Wednesday at a university in the Pakistani port city of Karachi.

Owen is on a three-day visit to Pakistan to promote football in the cricket-crazy country.

A large crowd of students, teachers, and football fans attended the ceremony at the NED University of Engineering and Technology.

The ground, according to a statement from the university, will be built in accordance with the infrastructure standards of the European Football Association.

Addressing the ceremony, Owen, who played for Liverpool, Real Madrid, and Manchester United during his illustrious career, said he was amazed by Pakistanis’ passion for the sport.

Pakistan, he said, is a wonderful country for football, expressing pleasure at being a part of the “historic” transformation of the sport in the country.

The 2001 Best Player of Year will attend the inaugural ceremony of the seventh edition of the local cricket league, the Pakistan Super League, at the national Stadium Karachi on Thursday.

He will also visit the Lyari Town area in Karachi, commonly known as “mini Brazil” for the passion of its residents for football.

Owen also met Army Chief Gen. Qamar Javed Bajwa in the northeastern garrison city of Rawalpindi on Tuesday, according to a statement from the army’s media wing.

The former player signed a three-year deal last September to become the official ambassador of the Pakistan Football League (PFL) to groom talent in the South Asian country.

Football is a popular sport in Pakistan, where cricket otherwise dominates, particularly in rural areas. Yet, the national team is ranked 200th in the FIFA World Rankings.

Lacking glamor and government funding, while having to deal with intra-federation schisms and land-grabbing petty mafia who have been sweeping up sports grounds, football in Pakistan has gradually declined from its previous rank as fourth on the Asian continent in the 1960s.