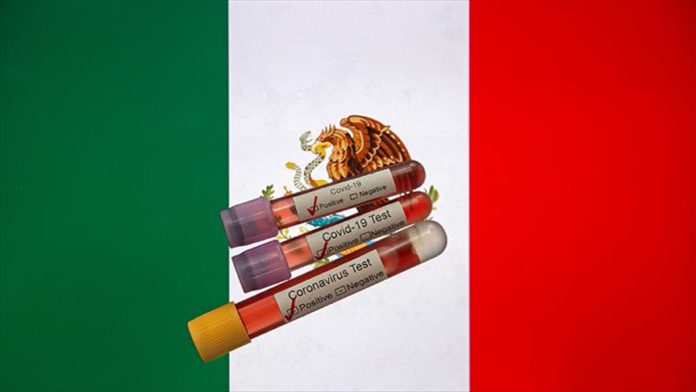 The first month of 2021 ended with Mexico still struggling through the worst of the coronavirus pandemic.

The country has registered nearly 2.1 million infections and 163,000 deaths, according to health ministry figures as of Feb. 4.

Health Deputy Minister Hugo Lopez Gatell recently said there are 83,529 estimated active cases. Hospital occupancy is at 56% with some states reporting more than 70% of beds being used for COVID-19 patients.

Taxi driver Jorge Luis Montoya Reyes from the state of Mexico has experienced the economic hardships brought on by the virus first-hand.

“To this moment, the pandemic keeps getting worse and jeopardizing our livelihood, and there is just no work,” he said. “The government is doing it wrong, the National Guard, the officials, and everyone lacks the proper attention that the problem needs.”

In terms of mortality, the state is the most affected of the 32 in the country, with 24,494 deaths.

“The hospitals do not count with the proper supplies or capacity anymore. If you are sick, you will be sent home in hopes your symptoms do not get any worse,” said Montoya Reyes.

People like Montoya Reyes, who depend on an active city, feel the government has failed to sustain its citizenry and they cite a poor response to the outbreak.

For Francisco Gutierrez Lucías, the pandemic has been an ongoing balance between having to work and taking precautions not to get sick.

“The government promised to clean the whole system. President [Andres Manuel] Lopez Obrador promised to take care of the working class. He left us without any help. We have no choice but to go out to the streets and work,” said the 58-year-old gardener in Metepec.

The Lowy Institute of Australia recently ranked Mexico as the second-worst country in handling the pandemic in a recent study that many here said shed light on the reality for many Mexicans.

Historian and economist Diego Castaneda Garza said, however, the variables used in the study to assess the situation do not depict the actual reality of the problem.

The author of Pandemonics told Anadolu Agency that to truly ponder the pandemic effects, we must look into the number of deaths and possible social effects in the medium and long term — social collateral damage such as poverty, inequality and long-term unemployment.

A case in point is Fabiola Davila, who used to work as an administrator for a local school.

After the pandemic hit and a shutdown left the school without enough resources to sustain her salary, she was let go. As a means to provide for her family, she spent her savings to open a small restaurant.

“We live day by day. The pandemic took a toll on small businesses after the government shut down all non-essential activities. There are days in which we are left stranded. Without any help or support from the government, we have no choice but to keep working and hope we don’t get sick.” said Davila.

The government’s handling of the pandemic stems from an initial wrongful perspective, said Castaneda Garza.

According to self-employed Estrada Lopez, the crisis results from a lack of compromise between Mexicans and the government.

“The people who are the most vulnerable to the virus are the ones who need to go out of their house. Those needs should be taken into consideration. A lot of businesses whose activities are non-essential are forcing their workers to work at the office,” he said.

This is an issue that Castaneda emphasized. “Since the beginning, the strategy regarding the pandemic was mistaken, and enough resources were not destined to assure national immobilization and reduce transmission,” he said.

None of the parties — government, citizenry nor employers — are giving the pandemic the seriousness it deserves, said Estrada Lopez. “We take the necessary precautions until it has affected our personal lives directly,” he said.

The government disclosed dates when vaccine shipments are supposed to arrive. A total of 174,208,450 doses are expected to be sent by the end 0f 2021. The vaccines will inoculate 104,604,225 Mexicans. As of Thursday, 695,088 vaccines have been provided to medical staff.

Twenty-four million doses of the Sputnik V vaccine, recently secured from Russia, are set to arrive later this month and will continue to come until May.

After Pfizer-Biotech suspended shipments to Mexico, the US-German laboratory will send 7,749,300 vaccines by the end of April.

Meanwhile, Mexico is working on the production of more than 25 million doses of the AstraZeneca vaccine.

“The Government must have a coherent plan to accelerate the vaccination, but it shouldn’t rely entirely on the vaccines as a solution. To suppress transmission is just as important, only in that way will the vaccine generate the optimal effect,” said Castaneda Garza.