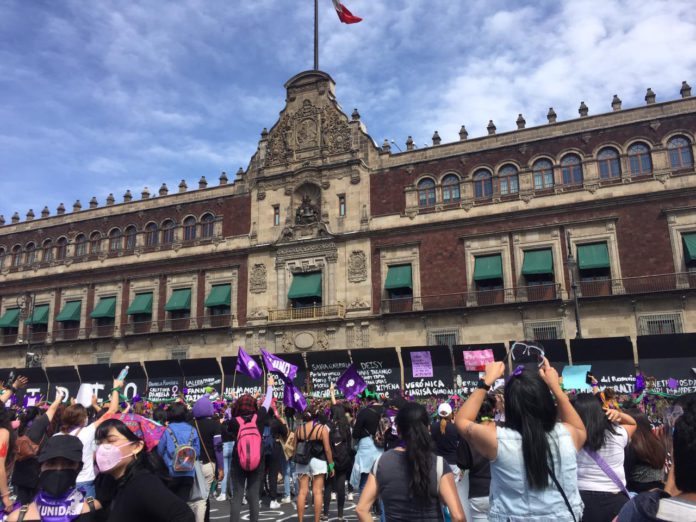 Hundreds of women in Mexico marked International Women’s Day on Monday by gathering in the main square of the nation’s capital and chanting “Femicide Mexico!” in unison, denouncing the rampant violence plaguing women in the country.

Gender violence in Mexico has become a major issue in recent years. With up to 11 women being murdered daily as a national average, life in the country for women has become more dire every day.

“Today is a day of struggle, because every two minutes, a girl or woman is raped. Because on average, 11 women are killed a day in Mexico, and among those cases, not all are classified as femicides by the legal system,” said Alejandra Sánchez Rosales, one of the women taking part in the protest.

Violence against women has been a growing trend in Mexico. In 2015, the total number of femicides reported in the country was 411, a deep contrast compared to 2020, when 967 femicides were reported.

The government has made feeble efforts to stop this trend, with only 2% of the total budget for 2021 dedicated to promoting gender equality and women’s rights.

President Andres Manuel Lopez Obrador’s strategy has relied on the armed forces, something that is troubling when considering past studies that show the impunity and level of violence within the military.

A 2018 study reported that of the 154 women apprehended by the military as crime suspects, 18% suffered some form of sexual abuse, while of the 54 women that were apprehended by the navy, 42% reported suffering from sexual assaults by navy personnel.

Another protester, Valeria Castellon Gomez, said the government does not take a stance or offer a solution to the problem and just circumvents the issue.

“Currently, 11 women are assassinated daily in Mexico. And yet there is no conscience on the part of the president to change the situation,” she added.

On March 5, anticipating the feminist march, the National Palace was surrounded by metal fencing to protect the building. Feminist groups and mothers of the victims of femicide used the metal wall as a canvas and hundreds of names were written on it in remembrance of women and girls who have been murdered.

“I believe this is a significant fight that we have to wage. There are many deaths, and the state does nothing about it. This is our reason for fighting every day. I think we shouldn’t even have to ask for it. Other countries have joined the cause because this is not the only place where this type of violence exists,” said Julieta Vargas Rodriguez.