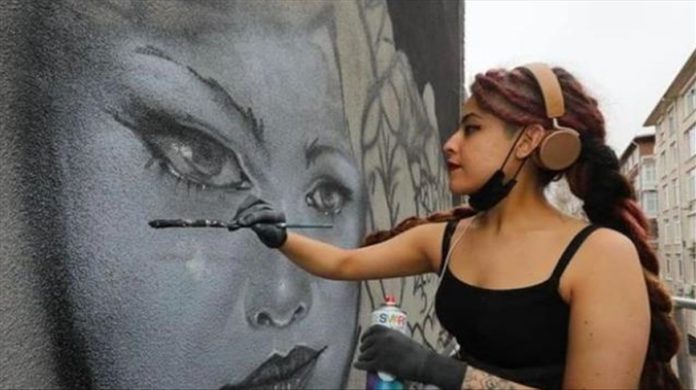 A mural painted by a Mexican artist was unveiled in the Turkish capital Monday, attracting a great deal of attention.

Kathrina Rupit, who was born in Mexico and lives in Ireland, painted a wall on Guvenlik Street in Ankara’s Cankaya district.

The ceremony was also attended by many representatives of diplomatic missions in Ankara.

During his remarks at the unveiling, Ambassador Martinez underscored that he hopes the mural will contribute to the city’s street art scene.

“We aware that in Ankara, as in other urban areas in the world, there is an increasing relevance in this field, so I am sure we will be seeing more and more murals in the near future,” he said.

Martinez thanked Rupit and all authorities of the municipality for making the elaboration of the mural possible and being partners in the promotion of Mexican culture.

He also expressed his “sincere gratitude” to all the artists, students and friends that helped Rupit paint the mural.

During her speech, Guner said the mural is a good example of cooperation between Cankaya Municipality and the Mexican Embassy.

Highlighting that the mural is based on the woman and nature theme, she said this is the third mural in Cankaya.

The mural, which depicts an image of a woman infused with color and traditional Mexican patterns and clothing, aims to contribute to the strengthening of friendship ties between Mexico and Turkey.