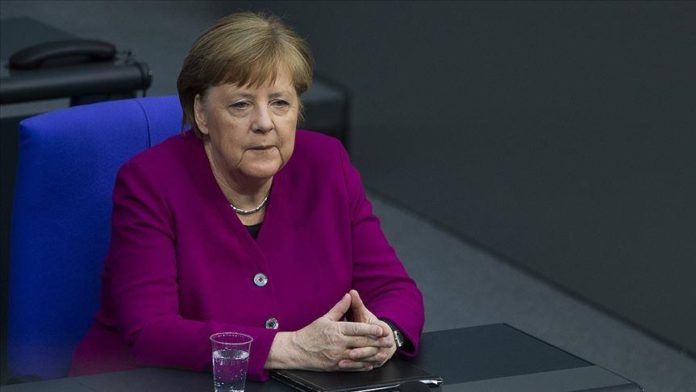 Speaking to reporters after an EU leaders summit in Brussels, Merkel said she was happy with the outcome of the meeting, and said decisions on Turkish-EU relations were also “well-balanced.”

Asked about Greece’s request that Germany halt arm sales and delivery of Type 214 class submarines to Turkey, Merkel said they should take into consideration “the strategic dependencies” within the NATO alliance.

“Issues related to arms exports and deliveries must be discussed within the NATO alliance,” Merkel said, adding that the majority of EU members were also members of the defense bloc.

Ahead of the summit, Greece has called for an EU arms embargo on Turkey due to recent tensions in the Eastern Mediterranean.

But during the discussion on Thursday evening, a majority of European leaders opposed an arms embargo or severe economic sanctions, opting instead for a softer line.

Merkel told reporters on Friday that they would continue their discussion on Turkey in the coming weeks.

“We would like to also coordinate our policies with the upcoming US administration about Turkey,” she said, referring to the Biden administration, set to take office on Jan. 20.

She said her government would wait for a report by EU foreign policy chief Josep Borrell on Turkish-EU relations before making any further evaluation of the matter.

‘Positive offer still on the table’

European leaders have sharply criticized Turkey for its energy exploration activities in the Eastern Mediterranean, gave their green light for new limited sanctions, but also repeated their offer for a “positive agenda” with Ankara, following their summit in Brussels.

“The European Council reaffirms the EU’s strategic interest in the development of a cooperative and mutually beneficial relationship with Turkey,” the leaders said in the summit conclusions.

“The offer for a positive EU-Turkey agenda remains on the table, provided Turkey shows readiness to promote a genuine partnership with the Union and its Member States and resolve differences through dialogue and in accordance with international law.”

The leaders instructed Borrell to prepare a report on the state of play of Turkish-EU political, economic, and trade relations and “on options how to proceed” in relations.

They said this report will be discussed at their next summit in March or earlier if this becomes necessary.

The summit also signaled that the EU may increase pressure on Ankara in the coming weeks by adding individuals from Turkey’s energy sector to a sanctions regime created in November 2019.

Currently only two executives of the Turkish Petroleum Corporation are subject to these sanctions, which consist of asset freezes and travel bans to the European Union.

Turkish leaders have repeatedly said that Ankara is in favor of resolving all outstanding problems in the region through international law, good neighborly relations, dialogue, and negotiation.