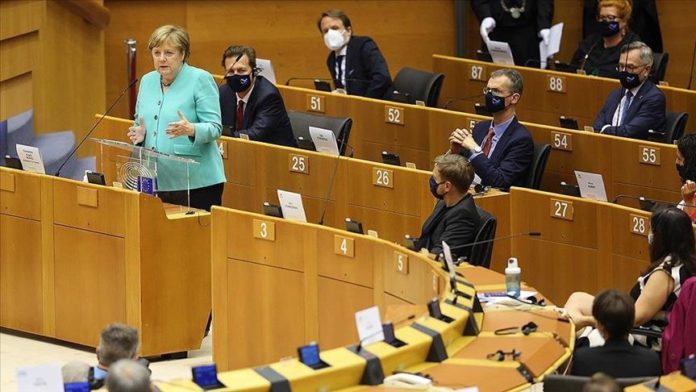 German Chancellor Angela Merkel on Tuesday attacked her coalition partner Social Democrats (SPD) for not ruling out a possible coalition with the far-left Die Linke, as the national election campaign entered its final weeks.

“This election is especially important because It will determine our country’s direction in the most difficult times,” Merkel stressed, and openly criticized Vice Chancellor Olaf Scholz, the SPD’s chancellor candidate.

“The best choice for our country is a CDU/CSU-led government with Armin Laschet as the Chancellor,” she said, adding that such a government will stand for moderation, reliability, and stability in Germany.

Merkel, who has been the nation’s most popular politician, is not running for another term, and did not take an active role in the political campaign.

But after her conservative bloc hit a record low in recent surveys, the outgoing chancellor stepped in, adopting a harsher tone against their rival center-left Social Democrats.

Recent surveys conducted by pollsters INSA and Kantar-Emnid have shown that the Social Democrats have taken a clear lead over Merkel’s CDU/CSU bloc, for the first time in 15 years.

The survey put support for the environmentalist Greens at 15.5%.

The latest survey by Kantar-Emnid also showed the Social Democrats in the lead at 25%, four points ahead of the Christian Democrats at 21%.