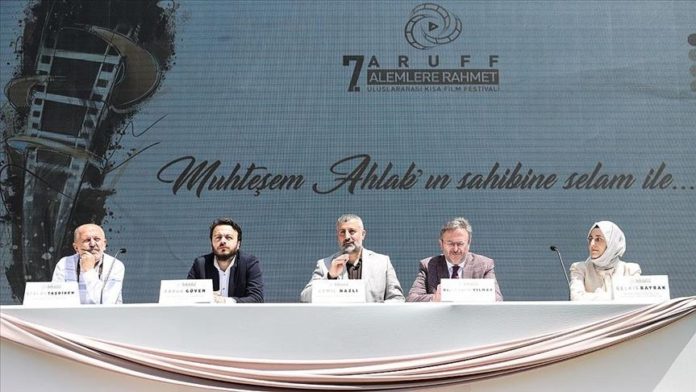 The Mercy to Universe International Short Film Festival will be held from Nov. 21- 27 in Istanbul.

An introductory meeting for the 7th iteration of the event was held on Friday.

The festival will be supported by Turkey’s Culture and Tourism Ministry with Anadolu Agency as its global communication partner.

The festival, which aims to introduce the teachings of Prophet Muhammad to the world, is organized by the Fidan Art and Siyer (Al-Sira) Foundations.

Speaking at the meeting, Abdulbaki Baser, chairman of the Fidan Art Foundation, said the festival is using cinema to spread the teachings of Prophet Muhammad.

Baser stated that the categories of animation, screenplay and documentary have been added to the festival in the past years.

He added that they have trained many students at the Hassan Bin Sabit Cinema Academy on script, direction, short film and cinematography.

“As Siyer Foundation, we have established a brand new foundation, named Fidan Art, with our friends in order to raise the bar for all these works and to realize new projects at the same time,” he added.

Cemil Nazli, director of the festival, said this year they will not follow a set theme, but contestants can narrate any aspect of Prophet Muhammad’s life.

TRT Joint and External Productions Manager Faruk Guven said the festival produces valuable screenplays which get great response in Turkey and the world.

Entries will be accepted until Oct. 31 at http://alemlererahmetfilm.com.