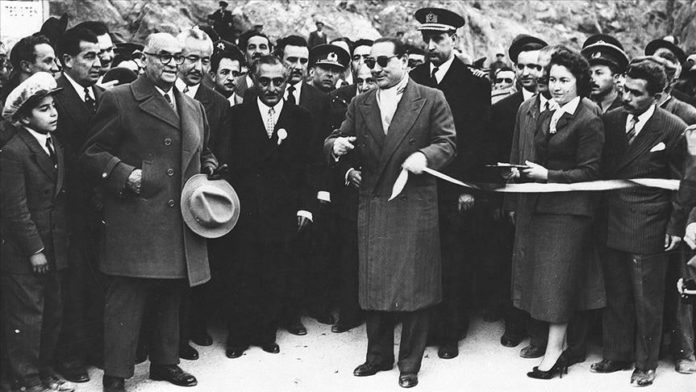 With the steps taken during the time of Turkey’s first democratically elected Prime Minister Adnan Menderes, the country saw a revolution in the agriculture sector in terms of the number of tractors, expansion of cultivated lands and increase in harvest.

Born to a farmer family in the Aegean province of Aydin, Menderes was fond of agriculture, according to the information compiled by Anadolu Agency correspondents from publications related to the Democrat Party (DP) period.

After coming to power in 1950, he said: “80% of people in Turkey live in villages. Soil needs good seeds, fertilizers, machinery and irrigation. Villagers cannot do that alone, we need to extend our hand as the state.”

The DP administration increased the budget share allocated for the Ministry of Agriculture, excluded the agricultural sector from tax, allocated millions of square meters of lands to the villagers, and established agricultural faculties, boosting agricultural education.

Increase in number of machinery

In this period, when the growth based on agriculture became a priority, the number of tractors, tractor plows and other tools and machines increased significantly. A transition from manpower to machine-based agriculture also took place during the period.

The Marshall Plan’s funds were directed to agriculture, accelerating mechanization. The number of tractors and tractor plows in 1949-1958 increased to over 48,000 from around 6,000. The number of other tools and machinery multiplied seven times to over 67,000.

Farmers were also supported with agricultural credits, base prices and support purchases.

The increase in the number of machinery also led to increased productivity as well as the expansion of cultivated lands. Thus, Turkey became a grain exporter by the 1960s.

In the period, cultivation areas and production of grains, legumes, cotton and industrial plants increased.

In addition, the construction of 40,000-kilometer (24,855-mile) highway, 30,000-kilometer (18,641-mile) village roads, increased the link between the countryside and cities, and also integrated agricultural sector with market economy.

In that period, fertilizer import and the lack of production was an obstacle in the spread of fertilizer use. Therefore, the establishment of both fertilizer research centers and fertilizer factories came to the agenda.

The Council of Ministers under the administration of Menderes decided to establish GUBRETAS, a fertilizer factory, on Nov. 6, 1952.

GUBRETAS was officially inaugurated in 1953 in southern Hatay province. The factory aimed to increase productivity in agriculture through the use of chemical fertilizers.

Another fertilizer factory under GUBRETAS was established in the northwestern province of Kocaeli in 1961.

GUBRETAS continues to be a fully national company operating under the Agricultural Credit Cooperatives.