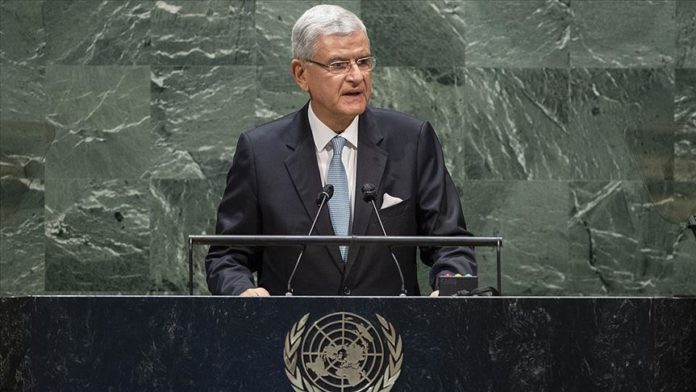 The General Debate of the 75th session of the UN General Assembly (UNGA 75) ended with world leaders underlining the vitality of multilateralism and the UN’s urgent need to reform to tackle global challenges and conflicts.

“Through their virtual presence, our political leaders have demonstrated their commitment to multilateralism and the United Nations. The vast majority confirmed this commitment in their speeches,” Volkan Bozkir, president of UNGA 75, said Tuesday at the closing ceremony of the virtual summit.

”While sovereign countries can undertake actions as they deemed fit, leaders were clear that solutions, in an interdependent and interconnected world, can only come from multilateral actions, with UN at its center,” the veteran Turkish diplomat added.

Although held virtually because of travel restrictions imposed by the novel coronavirus pandemic, the UN nevertheless exercised its convening power to bring all nations together to discuss the most pressing issues.

The most heated debate, which has gone on for more than four decades, was about reforming the Security Council, whose five permanent members with veto power do not reflect current global realities, but rather, the power structure established following World War II.

The council’s 10 other seats rotate among members who serve two-year terms.

While there is overwhelming support from member states to revamp the 15-member council, efforts have stalled as permanent members – the US, China, Russia, France and Britain — have shown reluctance to lose their privileges.

”In order to empower again the United Nations system, we must first reform the Security Council,” Turkey’s President Recep Tayyip Erdogan said in his address to the high-level meeting held to commemorate the 75th anniversary of the UN.

The Turkish president’s motto ”the world is bigger than five” has garnered widespread support as the biggest-ever rise against global injustice.

”A council with a structure that leaves the fate of 7 billion people at the mercy of five countries is not fair, and it is not sustainable either,” added Erdogan.

India’s Prime Minister Narendra Modi also criticized the UNSC structure in his speech Saturday, asking “For how long will India be kept out of the decision-making structures of the United Nations?”

Namibia’s President Hage Geingob lamented that he expressed hope at last year’s meeting in New York that this year would be ”an opportunity” to conclude the UNSC’s reform. But it was to no avail.

Argentina’s President Alberto Fernandez said the UN needs Security Council reform as well as new energy to live up to its responsibilities.

”We need a United Nations 4.0, with its fundamental values intact and with the clarity to incorporate the immense technological changes underway, to make them more human, more democratic and more socially inclusive,” Fernandez said.

German Chancellor Angela Merkel said that “the Security Council is all too often deadlocked when clear decisions are called for.”

She warned that ”the United Nations can be only as effective as its members are united.”

In his pre-recorded speech Monday, Venezuelan President Nicolas Maduro condemned US policies against his country and said, ”Venezuela supports a multipolar world, a renewed UN system, a system that knows how to enforce international law and protect the people of the world.”

Iran gets ready for 2-week closure as virus cases spike