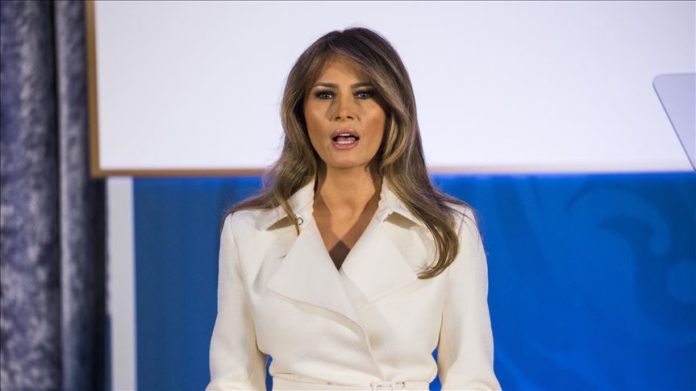 With only 10 weeks left, Republicans worked to boost President Donald Trump’s reelection bid on the second night of their national convention.

First lady Melania Trump addressed the convention from the White House Rose Garden in front of a small group of people, of which only a few wore face masks.

She addressed sensitive issues that other speakers did not touch, including the impact of the coronavirus in the US, and offered sympathy toward the victims of the pandemic, which has killed more than 178,000 people in the country that leads the world in cases and fatalities.

“I know many people are anxious and some feel helpless. I want you to know you are not alone,” she said.

She also referred to the racial unrest in the country and avoided attacks on Democratic nominee Joe Biden.

“I don’t want to use this precious time attacking the other side because as we saw last week, that kind of talk only serves to divide the country further,” the first lady said, criticizing the Democratic convention, where President Trump’s handling of the coronavirus was strongly condemned.

Secretary of State Mike Pompeo also made an appearance, breaking with a tradition of the nation’s top diplomats not to involve themselves in political conventions.

In his remarks, he praised the work of the Trump administration and talked about the success of the president’s America First foreign policy.

“This president has led bold initiatives in nearly every corner of the world,” Pompeo said, citing efforts in China, North Korea and the Middle East.

But the announcement that he would give remarks raised concerns about whether he was violating the law.

Joaquin Castro, a senior Democrat on the House Foreign Affairs Committee, announced Tuesday that he had opened an investigation into whether Pompeo is violating the Hatch Act, a federal law that prohibits employees in the executive branch of the federal government, except the president and vice president, from engaging in politics.

Pompeo’s speech was taped in Jerusalem while he was on a diplomatic trip to Israel. Castro has said it is “unacceptable” that a Secretary of State “would use official taxpayer-funded business to participate in a political party convention, particularly after the State Department published guidance that explicitly prohibits such activity.”

Pompeo had warned all US diplomatic missions last month that under federal law they should not take sides in the presidential campaign. The State Department claimed that Pompeo would be speaking as a private citizen and said taxpayer dollars were not funding the remarks.

During the night, the Republicans also sought to include compelling and emotional moments from real people, including prerecorded ceremonies of a pardon the president granted to Jon Ponder, a man arrested on suspicion of robbing a bank in Nevada in 2004, and a naturalization ceremony for five new citizens, all people of color.

Other speakers included the president’s youngest daughter, Tiffany Trump, who made a direct hit on the media, and Eric Trump, the president’s son and an executive vice president of the Trump Organization, who said Biden was “a career politician who has never signed the front of a check and does not know the slightest thing about the American worker or the American business.”