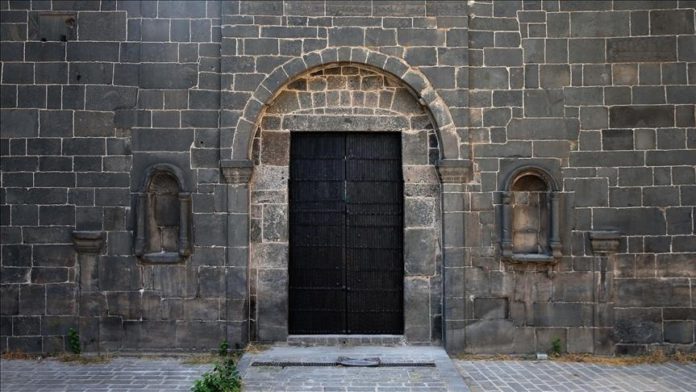 A medieval mountain gate known as Dagkapi was installed on the 8,000-year-old Walls of Diyarbakir in Turkey on Friday after its renovation.

Dagkapi, which has a history of more than a thousand years, has seen many years of the Diyarbakir Walls and has been meticulously repaired by specialists and installed in the wall with the same antique grandeur.

Diyarbakir Director of Surveying and Monuments Cemil Koc told Anadolu Agency that the historical Dagkapi was dismantled in 1942 and placed under protection in the museum.

“After 79 years, the 1111-year-old gate has been reconnected with its place,” he said, adding that assembling of the door at its original place took two days.

Efforts are underway to restore other centuries-old gates on the walls. Three gates Urfakapi and Yenikapi, as well as Kupelikapi, which opened into the wall from Ickale, are still being renovated, the official said.

Renovation work on the Yenikapi and Urfakapi gates will be completed soon, after which they will be reinstated.

“In this way, all of the walls’ gates will be restored and installed where they belong, in a manner that reminds them of their historical role,” he added.

Koc explained that the gate and iron of Diyarbakir are as important as the stone and that people reacted positively to their work.

The Citadel and the Walls of Diyarbakir, guarding the city for thousands of years as if it was guarding a holy relic by surrounding the city magnificently, and 8,000 years old Hevsel Gardens are nominated as a candidate for United Nations Educational, Scientific, and Cultural Organization’s (UNESCO) World Heritage List.

With its length of 6 kilometers, the Walls of Diyarbakir is the second-largest city wall in the world after the Great Wall of China. It is situated 100 m. above the valley of River Tigris. Diyarbakir still carries a medieval atmosphere with its walls encircling the city with its almost intact and impressive, 10-12 meters high and 3-5 meters thick, high walls.