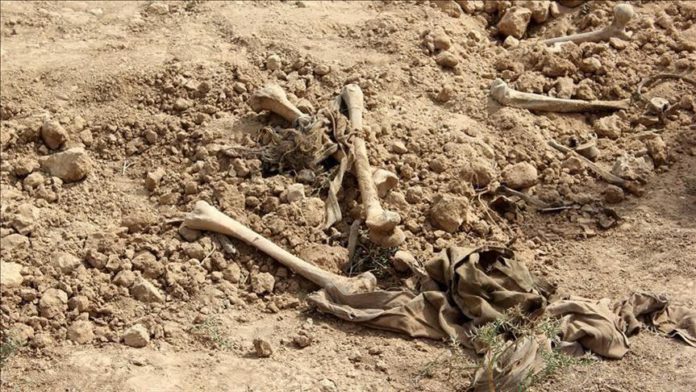 A mass grave of dozens of Iraqis killed by the Daesh/ISIS terrorist group was unearthed in the northern Kirkuk province, according to a local security officer on Tuesday.

The grave in the town of Dawood al-Alouka contains the remains of 45 people killed by Daesh/ISIS terrorists, the officer said on condition of anonymity because he was not authorized to speak to the media.

He said forensic authorities will exhume the bodies for DNA tests to identify them.

Daesh/ISIS terrorists gained full control in Mosul, Salahadin and Anbar provinces and seized territories in Diyala and Kirkuk in 2014. But Iraqi security forces managed to regain control in subsequent years.

The terror group left tens of mass graves in areas that were under their control in which thousands of opponents were killed and buried.

In 2017, Iraq declared victory over Daesh/ISIS by reclaiming all of its territory – about a third of the country’s area – invaded by the terrorist group. However, the terrorist group still maintains sleeper cells in large areas of Iraq and periodically launches attacks.

The United Nations Mission in Iraq documented 202 mass graves in 2018 in areas held by the terror group in which between 6000-12000 people were buried.