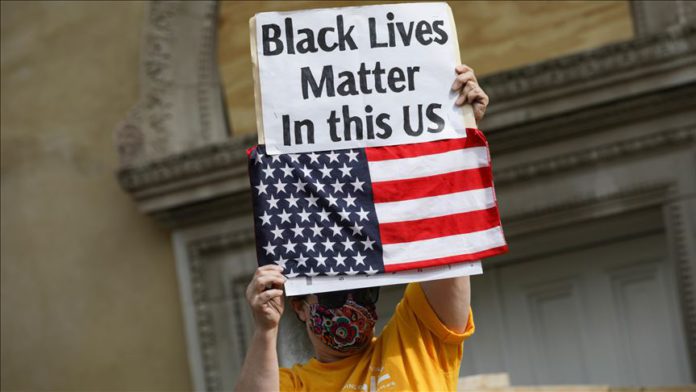 Nationwide protests against police brutality and racial injustice continued Tuesday evening for an eighth straight day as US President Donald Trump continued to call for “LAW & ORDER!” to be restored.

In Washington, DC, near-uniformly peaceful demonstrations continued through the night, but at least one car fire was reported in the nation’s capital. The cause of the fire is unknown.

Earlier in the day, Massachusetts Senator Elizabeth Warren joined demonstrations near the White House after they were cleared from the area on Monday minutes before Trump walked through Lafayette Park for a photo opportunity.

In an apparent pushback to the prior day’s forceful clearing by federal police, thousands assembled near the park on Tuesday, kneeling down, clapping and chanting slogans that included “Black Lives Matter,” “George Floyd” and “No Justice, No Peace.”

George Floyd died May 25 after a since-fired Minneapolis Police Department officer pinned his neck to the ground for nearly nine minutes, despite Floyd’s repeated pleas that he could not breathe. His death prompted largely peaceful mass demonstrations that have continued across the US, though some have devolved into violence and looting.

Derek Chauvin, the white officer who held Floyd’s neck to the ground with his knee, now faces third-degree murder and manslaughter charges. Three other officers have been fired in relation to Floyd’s death.

Warren was asked during the demonstration why Trump has the military deployed in the area, and she said simply “because he’s wrong.”

“He’s imposing violence on our people. People are here to protest peacefully,” the senator said through a face mask required under COVID-19 restrictions.

The nation’s capital is under a curfew that is in effect from 7 p.m. Tuesday to 6 a.m. Wednesday.

Demonstrations continued to be reported in major cities from Los Angeles to New York.

De Blasio placed the city under an earlier curfew Tuesday. It went into effect at 8 p.m. and was expected to last until 5 a.m. Eastern Time (0900GMT) Wednesday.

Media video footage appeared to show a heavy police presence in the city Tuesday evening as thousands of protesters were seen massing on city streets well into the night.