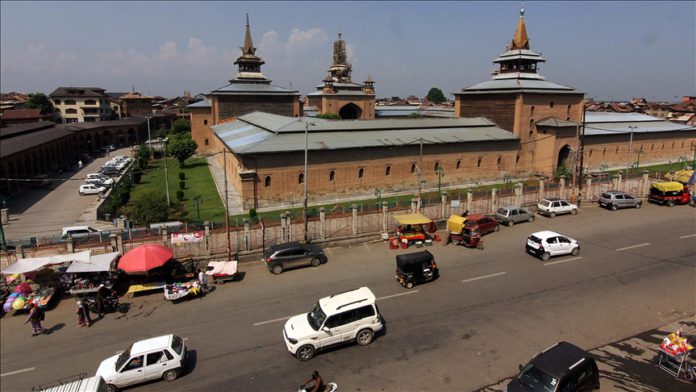 Masarat Alam Bhat, a jailed Kashmiri leader, has been named as the chairman of the All Parties Hurriyat Conference (APHC), an alliance of several parties that has led political resistance against Indian rule since the early 90s.

Bhat succeeds Syed Ali Geelani, the 91-year-old leader who passed away on Sept. 1 at his residence where the Indian government had detained him for the better part of the last decade.

Geelani was named chairman of the APHC for life but stepped down last year over differences with the constituent parties.

The alliance, however, had not named anyone to replace Geelani.

Shabir Ahmad Shah, another jailed leader once hailed as the “Nelson Mandela of Kashmir,” has been made the new vice chairman of the alliance.

Shah has spent a total of 33 years in Indian prisons intermittently since the 80s.

At present, the Indian government has jailed most top leaders of APHC and recent media reports suggest the group might be banned, just as other political and religious organizations that have been outlawed since 2019.

51-year-old Bhat, like his predecessor, is an uncompromising proponent of Kashmir’s freedom and has been under detention for some 25 years – the longest preventive custody in Asia, according to some lawyers.

The Public Safety Act (PSA), which authorizes the government to detain a person without bail for up to six months, has been repeatedly used against Bhat.

The grounds for detention have sometimes been contradictory.

Simultaneously, the police have named him in 50 cases – ranging from inciting protests to waging war against the state – but have yet to obtain a single conviction.

When the Supreme Court facilitated his release in 2015, Prime Minister Narendra Modi stood on the floor of the Indian Parliament and described Alam’s possible freedom as a “national outrage.”

Alam was arrested soon after for raising pro-Pakistan slogans during a demonstration in which protesters were waving Pakistani flags, and thrown back into jail.

Since 2015, he has been continuously under detention and the chances of his release appear bleak under the Modi government.

India must go back, that’s it

Born into a prosperous family of traders in Indian-administered Kashmir’s capital Srinagar in 1971, Bhat was orphaned while still a young boy. He was raised by his grandfather and two uncles.

He attended Tyndale Biscoe, a prestigious missionary school that was established in 1880 and boasts of several influential alumni.

In 1988, when Bhat was 17, Kashmir was bracing for the insurgency that was to erupt two years later against Indian rule.

He was arrested for the first time in 1990, at the age of 19, and has since passed most of his adult life in prison.

It is widely believed that Bhat’s role in mobilizing people during the massive 2008 and 2010 anti-India agitations sealed his fate as a PSA detainee forever.

He famously remarked in a 2015 interview: “What you see in Kashmir is Indian occupation… And occupations are not resolved. Occupations are ended. India must go back, that’s it.”

His ability to connect with and charge protesters, along with his fervent energy during demonstrations, made Bhat particularly popular among young Kashmiris.

Unlike Bhat, his new deputy Shah has participated in a few talks with Indian diplomats and politicians, but his stance on Kashmir’s right to self-determination has not changed.