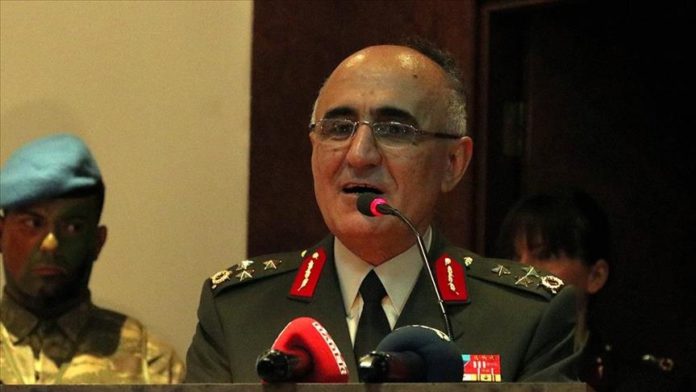 The commander who was martyred in Thursday’s helicopter crash in eastern Turkey was known for his support in the fight against FETO terror group and the development of Turkish drones.

The 8th Corps Commander Lt. Gen. Osman Erbas was born in 1962 in the central Yozgat province. Erbas completed his military academy training in 2000.

Promoted to brigadier general in 2008, Erbas served at the Department of Inspection of the National Defense Ministry between 2008-2010 and the 1st Mechanized Infantry Brigade Command in 2010-2012.

Support for development of Turkish drones

While serving as the commander of the 1st Mechanized Infantry Brigade in 2010, Erbas ensured that the personnel who would use drones in anti-terror operations had been given comprehensive training.

Erbas was promoted to major general in 2012, served as the head of Land Forces Intelligence Directorate in 2012-2015, and as the commander of the 6th Mechanized Infantry Division in 2015-2016.

Erbas was the commander of the 6th Mechanized Infantry Division during the defeated FETO coup on July 15, 2016. He became one of the important names of the resistance against the putschists with the instructions he gave to the unit commanders under his command.

He attended a funeral ceremony held in Adana on July 19, 2016 for martyred security forces members.

Erbas, who was promoted to lieutenant general, took over the post at the Chief of General Staff’s Intelligence Department on Aug. 4, 2016.

He testified before court about what happened on the coup night in the southeastern Gaziantep province.

Erbas said that he was trying to reach the headquarters from the southern Hatay province, which he visited to attend a ceremony, after he left his family at a safe place. He explained that he constantly warned the troops who contacted him by phone.

Even he got hoarse from talking loudly to put pressure on the staff, he added.

During his testimony at the hearing, Erbas said: “We hit the road with only one gun, without thinking about our own safety. As long as this nation exists, the armed forces will exist.”

Erbas was appointed as the commander of 8th Corps in 2017.

He was married with two children.

Eleven Turkish soldiers, including Erbas, were martyred and two others injured on Thursday when a military helicopter crashed in the eastern Bitlis province.

Speaking at the funeral service for the martyrs in the eastern Elazig province, National Defense Minister Hulusi Akar told reporters that the two wounded soldiers are in good condition.

Lamenting the loss of Erbas in the “tragic accident,” Akar called him a “friend” who had “served the armed forces”.