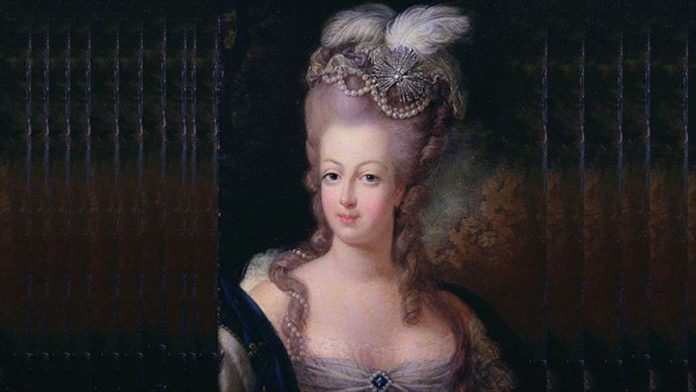 A single shoe belonging to Marie Antoinette, the last Queen of France who was executed during the French Revolution, will be auctioned on Sunday at a sale outside Paris.

The shoe is fashioned from goatskin and silk with a leather sole and four overlapping pleated ribbons. It measures 22.5 centimeters (8.8 inches) with a heel that is 4.7 centimeters (1.85 inches) in height. It is said to be in good condition, the only exception being slight wear in the silk.

Maria Antoinia Josefa Johana, the full birth name of Marie Antoinette, was born the Archduchess of Austria in Nov. 1755. In May 1770 at the age of 14, she married Louis-Auguste, Dauphin of France — meaning heir apparent — to the throne and became Dauphine of France with the union. Her name was changed to the French version upon entrance into her new home country. In May 1774, Louis-Auguste ascended to the throne, becoming Louis XVI, King of France and Navarre, and Marie-Antoinette his queen.

Versailles was the royal court and home to the queen and king as they reigned from 1774 until 1793. Known for her lavish spending, Marie Antoinette’s penchant for fashion, jewels, and gambling hardly sat well with the country which was headed into severe financial trouble.

She was rumored to be romantically licentious as well, and her increasingly lavish lifestyle was even said to be the catalyst for the country’s continued fiscal peril. Her famed phrase “Let them eat cake!” was one she supposedly tossed out when told that the French population — particularly those in Paris — were starving due to a lack of bread.

After her husband’s execution by guillotine on Jan. 21, 1793, Marie Antoinette was executed under the guillotine in the Place de la Concorde on Oct. 16, 1793 at the height of the French Revolution. She is buried in the necropolis of French kings in the Basilica of Saint-Denis north of Paris.

The shoe had ended up with Marie-Emilie Leschevin, a close friend of the queen’s head chambermaid, whose husband also died at the guillotine. The shoe had then stayed in subsequent generations of Leschevin’s family.