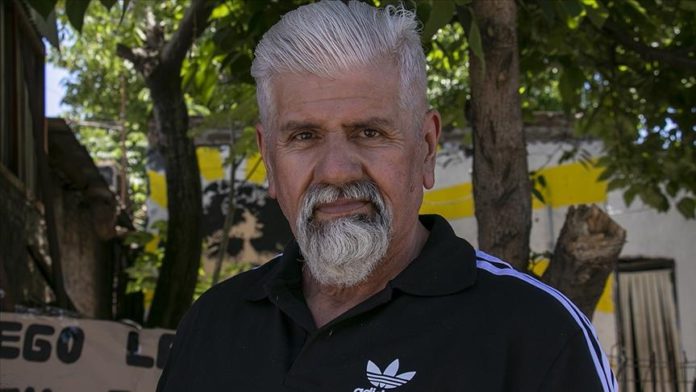 Norberto Fernandez — Maradona’s childhood friend — told Anadolu Agency on Saturday that he keeps Diego [Maradona] in his mind and heart and “Maradona will always remain as the greatest football player” in the game’s history.

Fernandez said he grew up in the same neighborhood, Villa Fiorito, one of the Buenos Aires suburbs, with Maradona.

He said that he was in contact with Maradona for a long time until 1998.

“I talked to him till 1998 on phone but he had some problems at that time and I lost contact as he changed his numbers,” Fernandez said.

“I am very sad because I last saw him in 2005,” he said and adding that Maradona always treated him with respect.

“When he became famous, he wanted to take me out from this neighborhood [Fiorito]. He told me ‘Come. Just work as my driver to carry my mom and dad’.”

Fernandez said that he had strong ties with Maradona.

“I know it sounds bad but I prefer to die to be close to him,” Fernandez said.

The world mourned Maradona as many football figures and clubs – including his former teams Boca Juniors, Barcelona, Sevilla and Napoli – paid homage to the 1986 FIFA World Cup winner on social media and web.

Maradona, who is regarded as one of football’s greatest players ever, died of heart failure Wednesday at the age of 60.

During his football career, he played for many well-known clubs such as Argentina’s Boca Juniors, Spanish teams Barcelona and Sevilla, and Italian club Napoli.

He also helped Napoli win the 1987 Italian Cup and scored 115 goals in 259 matches for the Italian team.

On Thursday, Napoli fans commemorated Maradona in Naples as thousands placed flowers, scarves, posters and candles in the San Paolo Stadium, the home of Napoli. Several fans cried and prayed for him.

Maradona was also one of the best players for Argentina, helping his nation win the 1986 World Cup in Mexico. He also produced 34 goals in 91 international caps for Argentina.