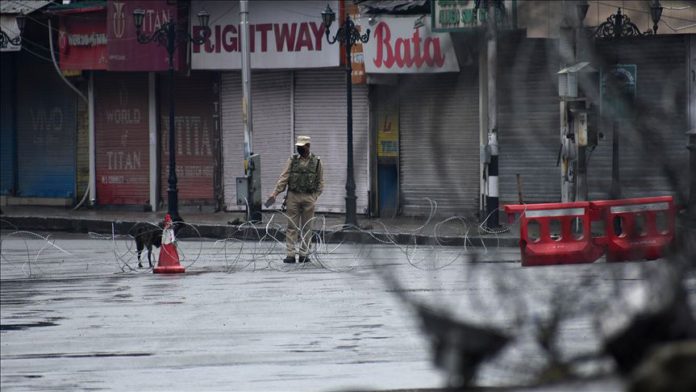 Describing Aug. 5, when India annexed Jammu and Kashmir region, a day of “betrayal” and “blackest day”, a pro-India Kashmiri politician said people were seething with anger against the move.

“The disapproval continues. The state may choose not to see the anger but it is there. Oppressive machinery in place does not allow people to exercise their right to demonstrate and hold meetings. Hundreds of people are still jailed thousands of miles away from their homes,” said Masoodi, in an exclusive interview with Anadolu Agency.

Rejecting achievements claimed by the government over the past year, he said a gunfight breaks every other day in the region, bellying the claims of return of peace.

Masoodi, a former chief justice of high court said the government moves not allowing the restoration of high-speed internet itself shows the extent of anger within the public.

“At a time when the state is willing to not even restore high-speed internet, there is no way this massive public disapproval would get articulated,” he said.

Masoodi is among few politicians who were not arrested before or after Aug. 5. He was only Kashmiri lawmaker allowed to participate in the debate last year when Indian Home Minister Amit Shah submitted the proposal for the approval of the parliament.

He has also submitted a petition in the Indian Supreme Court challenging these constitutional changes.

Masoodi further said that events over the past one year have shown that the Indian government’s argument the decades-old dispute of Kashmir would end once the special status is gone, is utterly hollow.

He said Kashmir returned to international radar and was mentioned more at the world forums than earlier.

“Heads of several countries have volunteered to facilitate a resolution. We do not know what provoked China exactly but the recent stand-off has something to do with what happened on Aug. 5. Look at how world media covered Kashmir. It was a self-defeating exercise,” Masoodi said.

Disapproval from sections of Indian society

Former chief justice turned politician claimed that many sections of Indian society also disapproved of the decision. He said when a picture of a serving Indian bureaucrat in Kashmir, who became the first top official to get citizenship rights, went viral on social media, another officer refused to apply for a domicile certificate.

“The officer posted that even if it is offered to him on a silver platter he would not accept it because it is soaked with the tears of Kashmiri people,” said Masoodi. He said several prominent Indians including a retired air vice-marshal has also challenged abrogation of special laws in the apex court.

He said those people facilitating changes in Kashmir will realize their blunder one day.

“You can’t continue with the oppressive machinery forever. There are people in India who oppose this,” he said.

Masoodi’s party NC had made the restoration of Kashmir’s original autonomous political status, which existed before 1953, as its key plank over the years. But failed to achieve anything once in power.

Before 1953, Kashmir had its prime minister and outsiders needed special permits to visit the region. When the ruling Bharatiya Janata Party decided to revoke the autonomous status, the NC leaders warned that the move will cease Kashmir’s relations with India.

But the party continues to have its three members in the Indian parliament.

Asked why he along with other members did not resign in protest, Masoodi said their opinions could be easily dismissed if they cease to be elected representatives in parliament.

“If we resign, they could always manage to project someone who would say everything being done in Kashmir is okay. Even the European parliamentarians who were brought on a guided tour to Kashmir figured that the handpicked people who met them were not true representatives,” he said.

On Indian Supreme Court’s attitude towards Kashmir, the former judge said one has to knock every door. The apex court had referred petitions related to the revocation of special provisions to a constitution bench.

“The track record of an institution should not deter us from using it,” he said.

He asked the Indian government to put the interests of the country above electoral and ideological goals.

“What would greatly help the country is to undo the Aug. 5 decisions. The pandemic has exposed the rampant poverty in India. If there is no peace there would be development neither in Kashmir nor elsewhere. India is a pluralistic society and its polity is guided by federal principles. The ruling government should respect these values,” he said.