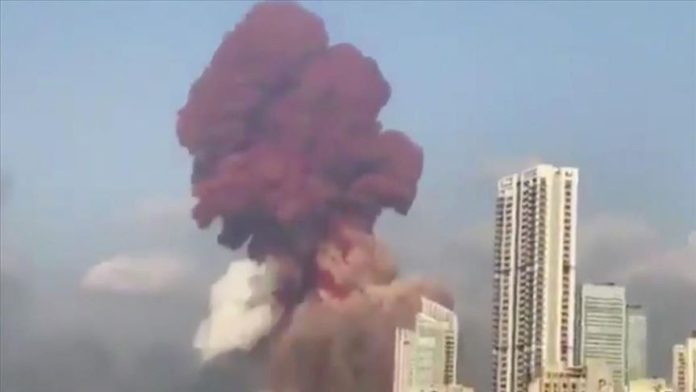 A fire at a warehouse with explosives at the Port of Beirut led to massive blasts causing widespread damage and leaving many injured, Lebanon’s official news agency reported on Tuesday.

The warehouse contained explosives that had previously been seized, Lebanese police chief said.

A large number of people were reportedly injured in the blasts, while former Prime Minister Saad al-Hariri — who lives near the area of the explosions — is said to be unharmed, according to initial reports.

“The fire led to major explosions which reverberated in the capital and the suburbs,” the agency said.

People are trapped under debris after the explosion took down a three-story building in the capital.

Beirut Governor Marwan Abboud who broke down in tears while speaking to reporters at the blast site compared the explosion to the horrific nuclear bombings of the Japanese cities of Hiroshima and Nagasaki that instantly killed hundreds of thousands of people.

Later in the day, sources close to Hezbollah denied the allegations that the explosion in Beirut was an attack by Israel on their own weapon depots.

Last week, Israeli forces bombed the border town of Kafr Shuba saying they had thwarted an infiltration attempt by Hezbollah, a claim the group denied.

The blast comes at a time when Lebanon’s economy is facing its worst crisis in decades.