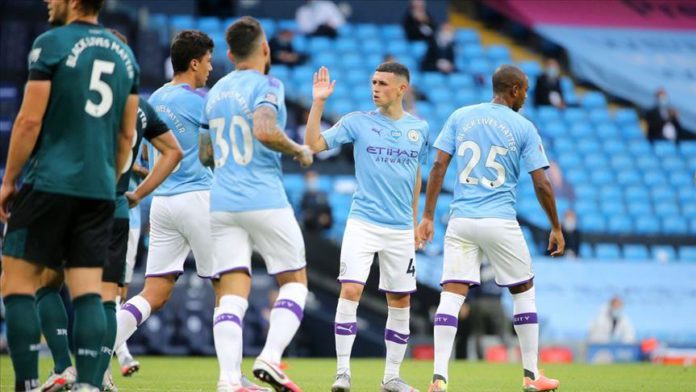 In the first half, Phil Foden and Riyad Mahrez’s two goals made the score 3-0 for the home team.

David Silva and Foden scored again in the second half as Manchester City earned a comfortable victory over Burnley.

Following the resumption of the Premie League, Manchester City gained two consecutive wins and increased their points to 63 in the second place, 20 points behind leaders Liverpool.

Burnley are in the 11th place with 39 points.

During the match, an aircraft towed a banner reading “White Lives Matter Burnley” over the stadium.

Both team players took a knee to show their solidarity with the Black Lives Matter movement ahead of the game.

Burnley in a statement ”strongly condemned” the action, calling the banner “offensive”.

“Burnley Football Club strongly condemns the actions of those responsible for the aircraft and offensive banner that flew over The Etihad Stadium on Monday evening. We wish to make it clear that those responsible are not welcome at Turf Moor.

“This, in no way, represents what Burnley Football Club stands for and we will work fully with the authorities to identify those responsible and issue lifetime bans,” the statement said.

Football players in the English Premier League have recently been sporting the “Black Lives Matter slogan” on their jerseys.

Black Lives Matter slogan replaced the players’ names on the back of their jerseys in England and its logo is featured on players’ uniforms in the wake of death of George Floyd, a black American man, in the US.

Floyd’s killing on May 25 sparked protests across the world, as well.