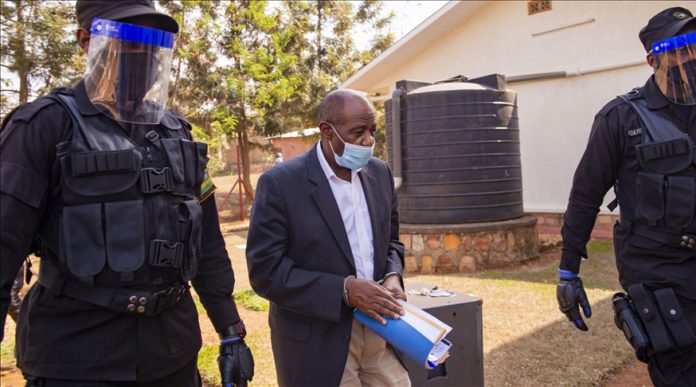 A Rwandan dissident was sentenced to 25 years in prison Monday on terrorism-related charges.

Paul Rusesabagina, who was portrayed as a hero in the Oscar-nominated film Hotel Rwanda, was convicted on eight of nine counts.

The conviction was related to acts of terrorism committed by the National Liberation Front (FLN) in 2018 which claimed the lives of nine civilians in Rwanda’s southwest.

The FLN is the armed wing of the political organization the Rwanda Movement for Democratic Change (MRCD), which operates out of various places in the region and abroad. Rusesabagina has acknowledged being a member of the MRCD, which is opposed to Rwandan President Paul Kagame’s rule.

The MRCD has denied responsibility for the violence carried out by the FLN and Rusesabagina has denied the charges against him.

Judges at the Rwandan High Court Special Chamber for International and Cross-border Crimes in the capital Kigali found Rusesabagina “guilty of creating and being a member of a terrorist organization but he is not guilty of forming an illegal armed group.”

“He is therefore sentenced to 25 years in prison,” Justice Antoine Muhima said after reading a lengthy verdict.

He was tried alongside 20 other defendants.

The court also sentenced Callixte Nsabimana, aka Sankara, who was a spokesman for the FLN, to 20 years in prison for his role in terrorist attacks on Rwanda and mobilization for terrorism activities.

In a statement, Rwandan government spokeswoman Yolande Makolo said the lengthy trial “had exposed the terrorist activities of the FLN group.”

“The evidence against the accused was indisputable, and the people of Rwanda will feel safer now that justice has been delivered. The trial has been a long and painful ordeal for the victims of FLN attacks, particularly for those who were called upon to testify. Our thoughts today are with these brave witnesses and the family and friends of the victims,” she said.

However, Rusesabagina’s family in a statement dismissed the verdict, saying “an innocent man kidnapped and held as a political prisoner was wrongfully convicted after going through a show trial.”

Rusesabagina faced multiple charges including forming an illegal armed group, financing terror activities, murder, kidnap and arson in a trial he boycotted since March on claims of “unfairness and a lack of independence.”

“They should be found guilty for being part of this terror group,” Judge Beatrice Mukamurenzi had said earlier in the day.

“They attacked people in their homes, or even in their cars on the road travelling,” she added.

While Rusesabagina acknowledged membership in the MRCD, he has denied responsibility for the violence carried out by the FLN.

He was arrested in August 2020 when the Burundi-bound plane he boarded from the United Arab Emirates instead landed in the Rwandan capital, Kigali.

He objected to his trial in Rwanda, telling the court then that he is a Belgian citizen being held “hostage” and questioned its competence to try him.

On Feb. 11, the European Parliament in a resolution called for the release of Rusesabagina and expressed doubt that he would receive a fair trial in Rwanda.

But in a counter resolution, Rwandan lawmakers described the demand of the European Parliament as an attack on the country’s judicial system.

“The reported lack of fair trial guarantees calls into question the fairness of the verdict,” US State Department spokesman Ned Price said in a statement.

Belgian Foreign Affairs Minister Sophie Wilmes said that despite repeated appeals from Belgium, it must be concluded that Rusesabagina had “not been given a fair and equitable trial, in particular with regard to the rights of the defense.”

Lewis Mudge, Central Africa director at Human Rights Watch, said “the Rwandan authorities undermined their case every step of the way starting with the manner in which they unlawfully detained Paul Rusesabagina through to multiple violations of the right to a fair trial.”

Rusesabagina inspired the Hollywood film Hotel Rwanda, in which as a hotelier he is depicted as having sheltered people during the Rwandan genocide.

The 2004 film told the story of how Rusesabagina used his influence as the hotel’s manager to bribe and convince military officials to secure a safe escape for about 1,200 people who had sought refuge at the Hotel Des Mille Collines in Kigali.

But IBUKA, an umbrella body of genocide survivors’ associations of Rwanda, said he had exaggerated his own role in helping hotel refugees escape the massacre.