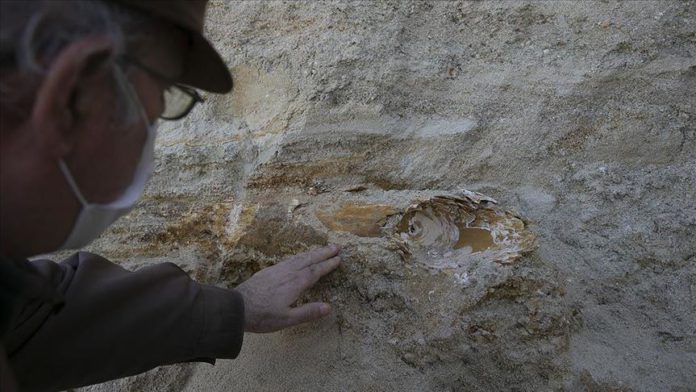 A fossil belonging to a mammoth was found in northwestern Edirne after villagers came across bones in the area on Tuesday.

After examination, it was noted that the bones were fossils of extinct mammoths. While the fossils are preserved in the Edirne Museum, it was stated that further work will be carried out to extract the remains in the area.

Professor Engin Beksac, head of the Art History Department at the University of Trakya, told Anadolu Agency that several mammoth bones were found from sand quarries in Trakya.

Emphasizing that mammoth bones are frequently encountered in different parts of Trakya, Beksac said the tooth they have recently found was large, adding that mammoths existed in the world for a very long time.

“For the exact dating of these fossils, paleontologists, geologists and geophysicists need to study the strata. Necessary measurements should be made and different dating methods should be used.

“This animal is quite large. A furry animal was 2-3 times the size of a normal elephant. When we look at the layers, there are traces that the region consisted of a swamp and a wetland,” he said.

Beksac stressed that the animal most likely died in that location and the tooth may have been dragged away.

February 27, 2021
ANKARA Turkey on Saturday welcomed the understanding reached between Indian and Pakistani militaries for a cease-fire along the disputed Kashmir border. “We wish that this understanding,...

February 27, 2021
JERUSALEM An Israeli soldier patrolling the border with Egypt was injured by stray bullets from inside the Egyptian territory, according to the Israeli military on...

February 27, 2021
MOGADISHU, Somalia Members of the UN Security Council unanimously approved sanctions for three leaders of the Al-Shabaab terror group after the US and Somali governments...