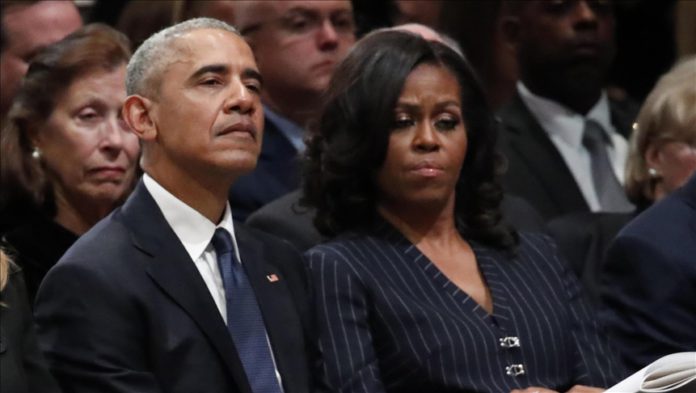 Marsat Onyango, the daughter of Mama Sarah Obama, told media that her mother had been ailing for some time.

“It’s true she went to be with her Lord,” she said.

In a condolences message, Kenyan President Uhuru Kenyatta said: “The passing away of Mama Sarah is a big blow to our nation. We’ve lost a strong, virtuous woman. A matriarch who held together the Obama family and was an icon of family values.”

“She was a loving and celebrated philanthropist who graciously shared the little she had with the less fortunate in her community,” he added.

Meanwhile, Kisumu Governor Anyang Nyong’o issued a message: “It is with deep sorrow and regret that I would like to announce the untimely passing of Mama Sarah Obama at Jaramogi Teaching and Referral Hospital here in Kisumu at 4.45 a.m. [0145GMT] in the morning after a short illness.”

“We send our condolences to the Obama family and the Kogelo people of Siaya county, Kenyans will miss her dearly,” he said.

The governor said that Mama Sarah was a philanthropist who mobilized funds to pay for school fees for many orphans and vulnerable children while also supporting widows.

In July 2018, US President Barack Obama visited his ancestral village in Kenya and participated in a traditional dance with his grandmother and half-sister Auma Obama.

At least 3 killed, 26 injured in bombing in Pakistan's Lahore