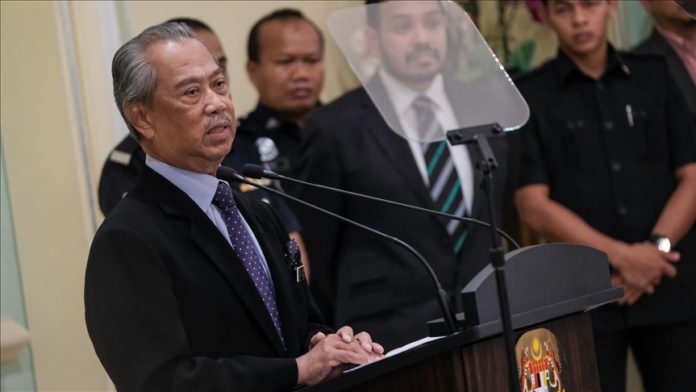 Malaysia was plunged into a new political crisis after the nation’s largest political party and a key ally in the ruling coalition withdrew its support for the Perikatan Nasional (PN) government.

A Malaysian analyst, however, said the move would not lead to the government collapse.

Azmi Hassan of the Malaysian University of Technology said the future depends on whether Umno MPs withdraw their individual support for the premier.

“Usually when the leader of a party makes a decision, everyone will follow that decision. However, it will not happen in Malaysian politics as it depends on the individual decision of the MPs,” Hassan told Anadolu Agency on Thursday.

A minimum of 112 MPs in the 222-seat House is required to form a new government.

The ruling government has a razor-thin majority of just 113 of 222 seats, of which 38 of belong to Umno.

Meanwhile, Umno has given the green light to its members of parliament proposing a no-confidence motion against Muhyiddin when the body convenes on July 26.

Senior Umno MP Tengku Razaleigh Hamzah has already stated that he is ready to take on the responsibility as interim prime minister as the country faces a political crisis.

“Anyone including me should be ready to take on such a task in the event of another political crisis to protect the people’s interests,” he said.

Hassan, however, said the one who has the authority to appoint the new premier is Yang Di-Pertuan Agong, the nation’s constitutional monarch and head of state.

During the 2020 Malaysian political crisis, Mahathir Mohamad was appointed interim prime minister by the king.

“I do not think Muhyidin would resign without a no-confidence motion at the parliamentary session,” he explained.

While withdrawing support for the premier, Wajdi Dusuki, the youth chief of Umno Asyraf, clarified that his party will not give support for the opposition leader Anwar Ibrahim.

“Our decision reflects the stance of our party leaders not to support Anwar Ibrahim as the prime minister,” he said in a statement Thursday.

There has been no official comment from Anwar Ibrahim’s side so far over the latest move by Umno and what steps they will take.

Mujahid Yusof Rawa, vice head of the Parti Amanah Negara (Amanah), said that the Pakatan Harapan (PH) coalition will remain the largest coalition bloc in Malaysia’s parliament after Umno pulled its support for the premier.

“The coalition has a solid 89 MPs backing Anwar, but that’s not enough to form a new government,” he continued.

“Yang di-Pertuan Agong should create a stable government to deal with the COVID-19 pandemic,” Mujahid said in a statement.

On Wednesday night, Umno head Ahmad Zahid Hamidi announced that his party has resolved to withdraw its support for Yassin and called for the premier’s resignation.

The decision came only hours after Muhyiddin appointed Umno vice head Ismail Sabri, who is also defense minister, to be deputy prime minister.

According to Zahid, the decision was made as Muhyiddin failed to fulfill the conditions underlined by Umno when it backed him to become prime minister in March 2020.

“Muhyiddin must make way for the interim minister, who will focus on dealing with the pandemic,” he added.

The Southeast Asian country has so far recorded more than 800,000 cases of COVID-19, with an additional 8,868 cases on Thursday.