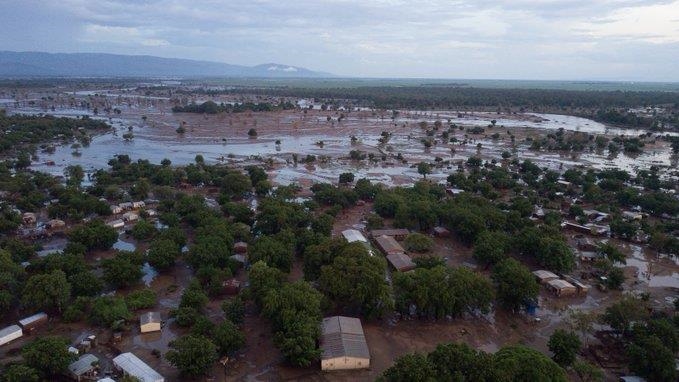 Malawi’s President Lazarus Chakwera said Monday that the impact of last week’s floods from Tropical Storm Ana has been huge and devastating.

He said Malawi will need help from both local and international partners to recover.

“Mozambique suffered more than we have, so we understand that we’re not the only ones in need of help. All the same, we’re asking our partners for support. We cannot manage on our own,” said Chakwera, who on Monday flew across the disaster areas to assess the damage caused by the storm.

According to the Department of Disaster Management Affairs (DoDMA), the storm has affected 845,685 people from 187,930 households in 17 districts, where 32 have been reported dead and 147 injured.

Another 20 people have been reported missing in the southern districts of Chikwawa and Mwanza.

DoDMA Commissioner Charles Kalemba said it is a miracle that thousands of people were not killed as the flood damage was extensive.

“Things have been so overwhelming, but then everything is working out because there are concerted efforts on the ground which are needed,” Kalemba told Anadolu Agency.

Chakwera said it is clear that climate change and the adverse effects that have come with it have been devastating on Malawi.

“I am struggling to find the words to describe this disaster. There are places where people are yet to receive help because they have become inaccessible,” he said.

The Malawi leader said after assessing the damage that his ministers, who were sworn in on Sunday, will meet to discuss the budget for the next financial year to start in April instead of June as usual.

“Our budget will reflect the urgent need to rebuild the country,” he said.

The president dissolved his entire Cabinet on Jan. 24, before the floods hit. He has since sworn in 21 ministers and nine deputy ministers.

Chakwera has been under pressure from the civil society to remove the entire Cabinet due to corruption allegations. He has since issued a stern warning to the new ministers against corruption.

“Corruption comes in many forms, and the opportunities to succumb to it in this country abound, but you must resist it at every turn,” he said.

He said he also expects regular and timely reports on the progress the ministries are making.

“I expect those reports to be presented to me directly and for me to be the one that directs you on whether any contents in your reports should be shared with anyone else,” Chakwera said.