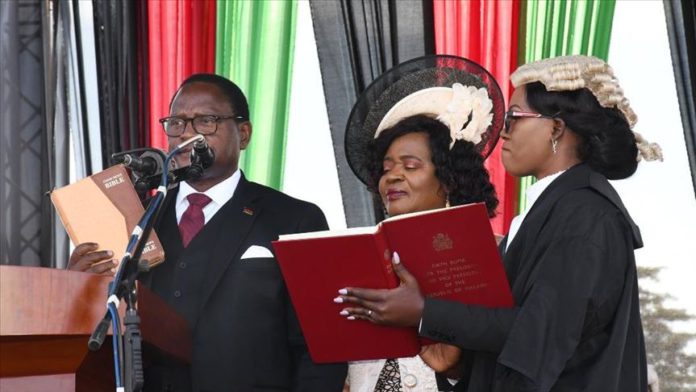 Malawi’s newly elected president was sworn in on Sunday, pledging to make the country inclusive to all.

“Time has come for Malawians to go beyond their dreams and make them come true. I am duty bound by God and all of you to give you my best,” Lazarus McCarthy Chakwera said after taking an oath of office at the Parliament Building in the capital Lilongwe.

“I want to tell you that this new Malawi is a home for everyone whether you voted for me or not.”

The new leader said he will form a government that inspires not infuriates, and listens to its people.

“I accept this call to serve you with joy and pledge to give it all my best,” he said, much to the applause of thousands of his supporters who came to witness the ceremony.

The soft-spoken former preacher garnered 58.57% of the votes against Mutharika’s 39%.

Mutharika, 80, is yet to accept defeat, and alleges the election was marred with violence.

A top court in the South African nation this February annulled the May 2019 presidential vote in which Mutharika won due to irregularities.

In a congratulatory message, Zambian President Edgar Lungu said Chakwera’s election is an affirmation of the trust and confidence that the people of Malawi have in his leadership qualities.

Lungu hoped the opposition leader’s victory ushers in a wave of democratic change that the people of Malawi have been advocating for.

“Zambia and Malawi share strong brotherly bonds of friendship based on mutual respect. I, therefore, wish to take this opportunity to reaffirm my country’s commitment to maintaining strong bilateral relations that our two countries have continued to enjoy, for the mutual benefit of our two peoples,” said Lungu in a statement.

Chakwera joined politics in 2013 after resigning as leader of the charismatic church Malawi Assemblies of God to contest for the presidency of MCP – a party that helped liberate Malawi from colonial Britain, and ruled for 31 years under dictator Hastings Kamuzu Banda until 1994.

He propelled MCP’s renaissance by roping in young people into the party. But his iron grip to party reigns came under challenge by an internal rebellion from the old guard, resulting in a breakaway group dragging Chakwera to court.

However, Chakwera won the court battles setting up for his 2014 showdown with Mutharika, and again in 2020 with Saulosi Chilima of United Transformation Movement as his running mate.

“He is a game-changer, he comes with no excessive garbage,” said Blessing Chimsinga, a political scientist at the University of Malawi, in an interview with The Nation, a local daily.