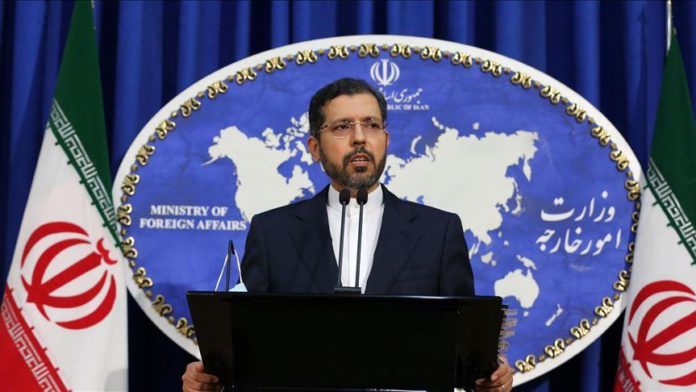 Iran says it is closely monitoring the movement of US vessels in the Persian Gulf and has conveyed warnings to Washington and regional countries.

Iran’s intelligence and security agencies are watching the “hidden moves” of the US in the region, Foreign Ministry spokesman Saeed Khatibzadeh told reporters in the capital Tehran on Monday.

The warnings have been conveyed to Washington, he said, and regional countries have also been warned “not to fall into the trap.”

Citing remarks by Foreign Minister Javad Zarif, he said the “role of agents and allies” of Israel can be seen in rising US-Iranian tensions.

Zarif had earlier warned that Israel was plotting attacks on US forces in neighboring Iraq to stir flames of war between Tehran and Washington.

Khatibzadeh said Iran “does not seek war” but will consider all scenarios to “protect the national interest,” vowing a “serious response” to any attack.

He said Zarif in his recent talks with counterparts from Qatar and Kuwait asserted that the US would be held responsible for any “possible adventurism in the region.”

The US government on Sunday reversed a previous order, ordering the aircraft carrier Nimitz to remain in the Persian Gulf region in view of what it termed “threats issued by Iranian leaders against President Trump and other US officials.”

The presence of the Nimitz and other warships in the region in recent weeks has prompted strong reactions from Iranian officials.

The US Air Force also sent strategic B-52 bombers three times in the last month close to Iranian territorial waters.

Apart from that, there have been reports of US and Israeli submarines being dispatched to the Persian Gulf for the first time in more than a decade, which stirred tensions further.

This came amid fears that Iran would seek retaliation for the killing of top military commander Qasem Soleimani ahead of the first anniversary of his killing this week.

The fears were further fueled by recent attack on the US Embassy in Iraq, which the US blamed on Iranian-allied groups in the country. Iran, however, denied the claim.

Iran this week marked the first anniversary since the killing of Soleimani last January with a massive commemorative ceremony in Tehran attended by local and foreign officials.

Islamic Revolutionary Guard Corps (IRGC) chief Hossein Salami, addressing the ceremony, referred to recent escalation between Iran and the US in the Persian Gulf, saying Tehran is “ready for any eventuality.”

Last week, Iran’s permanent mission to the UN wrote to UN Secretary-General Antonio Guterres about US “military adventurism” in the Persian Gulf and the Sea of Oman.

Iranian officials have often spoken about avenging the killing of Soleimani, who headed the IRGC’s Quds Force, without specifying how and when this might happen.

The US and Israel have also been anticipating retaliation over the killing last November of top Iranian nuclear scientist Mohsen Fakhrizadeh, which Iran blamed on Israel.

Alireza Ahmadi, a Tehran-based geostrategic analyst who specializes in US-Iran relations, told Anadolu Agency that the idea that Iran was going to seek retaliation on Soleimani’s anniversary seemed to be “American preoccupation rather than an Iranian one.”

“The constant back-and-forth between a provocative arms buildup and removing these forces is more reflective of [President Donald] Trump’s chaotic thinking and a broken national security decision-making process than ‘deterrence’ or intelligence,” Ahmadi said.

He added that it is not in Iran’s interest “to start a military conflict with a president that has only days left in his term,” referring to Trump, set to leave office to his successor Joe Biden on Jan. 20.