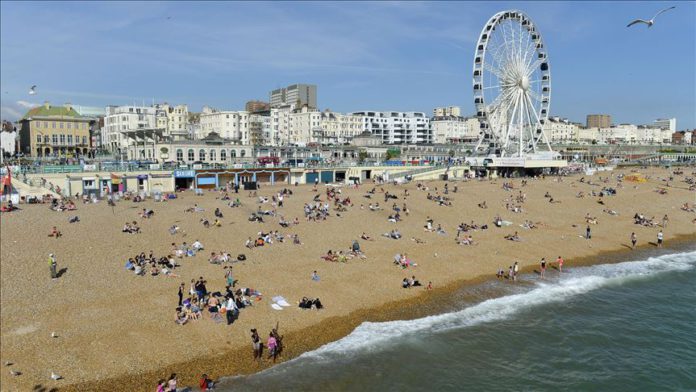 A major incident was declared on England’s southern coast yesterday as thousands upon thousands of people packed onto the beaches, causing a wave of condemnations and anger on Friday.

The order was issued by Bournemouth, Christchurch, and Poole council to deal with overcrowding and violence on beaches. Health Secretary Matt Hancock threatened to shut down beaches in response.

Bournemouth East MP Tobias Ellwood said half a million people had flocked to the beaches in and around his constituency in southern England, adding: “A lot of people have chosen to be not just irresponsible but dangerous.”

Ellwood said Bournemouth was deluged with visitors and that the local authority could not cope.

“We have the perfect storm of incredible weather and a liberation of some COVID-19 guidelines and given the wider consequences of a second spike, the government needs to offer assistance and respond to this dangerous event,” he said.

Local council leader Vikki Slade said: “The irresponsible behavior and actions of so many people is just shocking and our services are stretched to the absolute hilt trying to keep everyone safe. We have had no choice but to declare a major incident and initiate an emergency response.”

Local councillor Laura Miller said she was abused after trying to turn people away.

“I have been shouted and sworn at and one guy spat at me,” she said, and added: “These are people who have travelled three or four hours in their car, they are hot and grumpy and then they are turned away. Some drivers have ignored our barriers and just knocked them over and driven through.”

Hancock told local radio he was prepared to shut down the beaches if necessary.

“We do have that power,” he said, but also noted: “I am reluctant to use it because people have had a pretty tough lockdown and I want everybody to be able to enjoy the sunshine.”

“But we do have those powers and if we see a spike in the number of cases then we will take action,” he said.

Dr. Chris Whitty, England’s chief medical officer, tweeted: “COVID-19 has gone down due to the efforts of everyone but is still in general circulation. If we do not follow social distancing guidance then cases will rise again. Naturally people will want to enjoy the sun but we need to do so in a way that is safe for all.”

“Clearly we are still in a public health crisis and such a significant volume of people heading to one area places a further strain on emergency services resources,” she said.

Her views were echoed by Martin Hewitt, the chairman of the National Police Chiefs’ Council.

“As restrictions ease further from 4 July in England, it is important for everyone to take more personal responsibility for their safety by continuing to follow official advice and government regulations,” he said.

Police announced that three men were stabbed at the Bournemouth beach. All three were in their 20s and from London, and their injuries were not life-threatening.

Prime Minister Boris Johnson’s spokesman commented on the situation in Bournemouth, passing the responsibility onto local councils: “Everyone should be able to enjoy the sunshine, and we understand that people want to enjoy public spaces, but it is important we don’t undo the hard work of the British public in reducing the transmission of this virus.

“It is a matter for local authorities to manage numbers, alongside emergency services and Public Health England. As we saw yesterday they are best placed to make those decisions on a case-by-case basis. We have been clear that should we see case numbers increase we will introduce local lockdowns.”

In Liverpool, around 2,000 people had gathered outside Liverpool FC’s famous Anfield stadium last night after the team won the English Premier League title for the first time in 30 years.

This was condemned by local police, with Assistant Chief Constable Rob Carden saying the city and its surrounding region was already “disproportionately affected” by the pandemic.

“Unfortunately, as we have seen throughout the lockdown period, not everyone adhered to the regulations in place,” he said, noting: “Although the vast majority of celebrations were good natured, a large number of people chose to gather outside the stadium.”

British health authorities announced on Thursday that 149 more people had died from the novel coronavirus across the UK over the past 24 hours, bringing the total to over 43,230.

More than 9.63 million COVID-19 cases have been reported in 188 countries and regions since the virus emerged in China last December.

The pandemic has claimed nearly 490,000 lives worldwide, while recoveries exceeded 4.86 million, according to figures compiled by the US’ Johns Hopkins University.