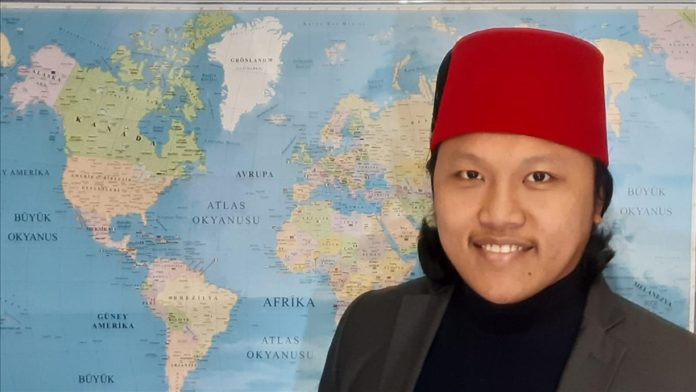 It was a sunny day in 2013 when Syafiq Mardi, now 27, landed in Turkiye’s Mediterranean Sea-bordering province of Adana.

He had just graduated in Singapore and traveled far from his home in eastern Geylang estate of the city-state to study theology at Cukurova University.

A student who was very active at the Islamic Religious Council of Singapore (MUIS), Mardi had succeeded in getting a full scholarship to support his stay and study through the Turkiye Burslari, a program run by the Presidency of Turks Abroad and Related Communities (YTB).

“I studied both religious education and modern courses back home,” said Mardi, before he took a Turkish Airlines flight to Istanbul.

In 2018, Mardi graduated with first-class honors and soon applied for a master’s program in the department of Islamic History at the same university.

“This is where I chose to dig deep into Ottoman-Singapore relations,” Mardi told Anadolu Agency in an interview.

The next two years were quite revealing for him and his supervisor, Fatih Yahya Ayaz, a professor in Islamic history and art.

Mardi was already fluent in Turkish, as the YTB requires all scholarship holders to study academic-level Turkish before starting their formal degree courses.

“But, knowing Turkish is not enough to study the Ottoman era,” he notes. “To study the diplomatic and allied relations of the Ottoman state with its then-international partners, one must know the language used during that era.”

During the summer of 2018, Mardi attended classes at Turkiye’s Directorate of State Archives in Istanbul to study Ottoman Turkish.

The directorate is the main archival body of the country, where the majority of Ottoman-era historical archives are preserved.

This is where Mardi also improved his Arabic.

A version of Turkish with a vast mixture of both Arabic and Persian grammar and vocabulary, Ottoman Turkish was the official language of the Ottoman Empire.

Mardi thus began a two-year journey to conduct research about Ottoman-Singapore relations between 1864-1924.

“I studied almost 286 documents from the Ottoman Archives about Singapore,” Mardi said, roving through his thesis which he compiled into a book.

Singapore was a colony of the British Empire, from which it attained independence in 1965.

Turkiye and Singapore established modern-day diplomatic relations in 1969, with Turkiye opening an Embassy in the Southeast Asian country on Nov. 1, 1985.

– Voyage to Japan stops at Singapore

Ottoman Sultan Abdulhamid II, who was also caliph of the Muslim world, sent his envoy Miralay Osman on a voyage to Japan in 1889.

Osman commanded the Ertugrul, a frigate representing the Ottoman state, reaching Singapore on Nov. 15, 1889 for repairs and replenishment.

The commander, his crew, and the vessel stayed there until March 22, 1890.

“Muslims from the city-state itself and the neighboring regions, flocked to Johnston Pier port in Singapore, and were excited to see the Ottoman flag when the frigate docked,” Mardi explained.

The Southeast Asian Muslims, he added, “in fact, had come to receive the Ertugrul frigate and welcome the commander.”

During weekly congregational prayers on Friday, following the arrival of the Ottoman frigate, said Mardi, “the Muslims also mentioned the name of Sultan Abdulhamid II during the Friday sermon.”

“Muslims gave several gifts, like cows, to the Ertugrul frigate crew,” he added.

Not just from Singapore, Mardi’s study reveals, “Muslims from other neighboring places including Indonesia, Malaysia, Brunei came to pay respects to the Ottoman commander and his crew.”

“Later, to thank the Muslims of Singapore and the region, the frigate’s musicians made a performance at Esplanade Park Singapore on Nov. 25, 1889,” he added.

Osman restarted his voyage to Japan in March 1890, where he died due to a typhoon.

Ahmed Ataullah Efendi, who was born to a Turkish father in South Africa, was summoned to Istanbul by Ottoman officials.

After his arrival in the capital of the Ottoman state, Abdulhamid appointed Ataullah Efendi as the state’s first Consul General to Singapore.

“Since Singapore was colony of the British, Queen Victoria approved the appointment made by the Ottomans, thus making it the first official diplomatic appointment to Singapore from the Ottoman state,” Mardi said.

His father, Abu Bakr Efendi, Mardi said, was a reputed Muslim scholar appointed and sent by the Ottomans to teach and spread Islam in South Africa.

Earlier, Mardi added, there were two honorary representatives of the Ottomans in Singapore.

Ataullah Efendi started his official journey to Singapore with stops in Yemen and modern-day Sri Lanka.

On Nov. 7, 1901, Ataullah Efendi assumed his duties as the first Turkish Consul General in Singapore.

He operated from Imperial Ottoman Consulate Singapore, then located at No: 94 Robinson Road, which was inaugurated on Nov. 16, 1901.

“After he died, Syed Muhammad Alsagoff succeeded him. But, his appointment was not approved by the queen because the Dutch government in Indonesia pressured the British not to appoint an Arab to such a position as this could lead to an anti-colonial movement,” Mardi noted.

“The Singapore press of that era has also recorded these events,” he explained.

Both of these officials were of Arab descent from families originating in Yemen, but were born in Indonesia and had migrated to Singapore.

With the invention of steam ships, said Mardi, Muslims from Southeast Asia more frequently traveled to what is today Saudi Arabia “for the annual Hajj pilgrimage, as it was a faster and cheaper mode of transport.”

“I found that Alsagoff had donated his own money to bring back some people with Southeast Asian residency from Saudi Arabia who were unable to return home because they could not afford to buy the return ticket for the ship,” he said.

“Else, Alsagoff thought it would be burden on the Ottoman state if those people were not brought home,” Mardi explained.

Until then, there was no system to maintain records of people leaving Singapore and the region for travel to Arab lands.

“(Ataullah) Efendi systematized it,” Mardi argues. “To keep record of people who would embark on foreign travels from Southeast Asia, (Ataullah) Efendi introduced a visa document which would allow the people to enter Ottoman lands,” he said.

“It would help keep record of people so that, in case of any misadventure or death, their families would be properly informed,” the Singaporean scholar said. “It was not the case in the past.”

“There was no such travel document before.”

He said this also helped formalize the Hajj pilgrimage, as well as trade.

He is buried inside the Temenggong Mosque compound in Singapore. This mosque belongs to the Malaysia Johor Royal family.

“On his coffin, the Ottoman as well as British flags were spread, side by side, as a show of respect,” Mardi said.

“His funeral prayers started a day later, as Muslims from the region flocked to bid adieu to the first top Ottoman diplomat in the region,” he added.

Mardi said his study reveals that the Ottoman archives and archives of the Singaporean press of that era “complement each other.”

“I did not find any significant contradiction,” he claimed.

His study also sheds light on how Muslims of Southeast Asia collected money as their contribution in the construction of the Hijaz railways.

“They have also sent monetary aid to Ottomans during Balkan wars,” he added.

“During World War I, some Turks detained by the British in Tanglin barracks were taken good care of by the people of Singapore.”