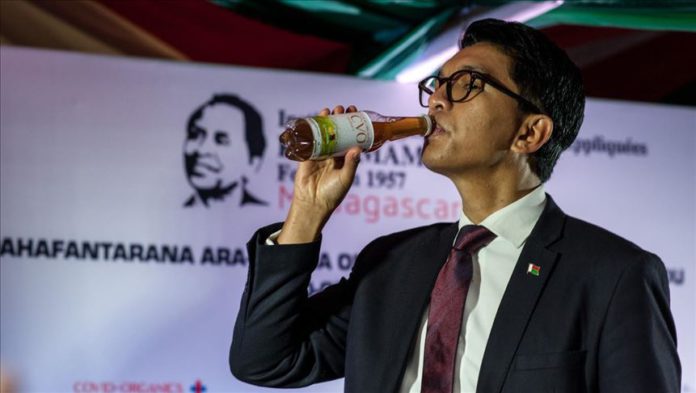 The president of Madagascar urged citizens to protect themselves from the novel coronavirus by drinking COVID Organics (CVO), an organic herbal beverage he claimed could prevent or cure the virus.

“Let’s drink this herbal tea to protect ourselves, to protect our family and our neighbors […] and there will be no more deaths,” Andry Rajoelina said in a speech on Sunday night, according to local daily L’express de Madagascar.

His remarks came a few hours after the announcement of the country’s first coronavirus death — a 57-year-old man who also had diabetes.

Rajoelina said none of the new cases in the country had drunk CVO, which he said was distributed free of charge in the three regions affected by the pandemic.

The island off the southeastern coast of Africa has confirmed 304 COVID-19 cases, with one death and 114 recoveries, according to data compiled by the US-based John Hopkins University.

Earlier this month, Rajoelina said his government was collaborating with foreign doctors and scientists to study alternative research possibilities, though carrying on with trials of the Artemisia plant, the main component of CVO.

Known under the scientific name of Artemesia Annua, the plant of Chinese origin was first imported to Madagascar in the 1970s to treat malaria.

However, the World Health Organization (WHO) warned against the use of CVO without medical supervision and cautioned against self-medication.

On Sunday, the National Agency for Food and Drug Administration and Control (NAFDAC) in Nigeria said it would undertake laboratory tests of the herbal drug from Madagascar.

“My position regarding all herbal or traditional medicines is that any such formulations should be sent to the statutory regulators for thorough scientific verification. We will not put anything to use in Nigeria without the endorsement of our regulatory institutions,” President Muhammadu Buhari said on Twitter.

There were 81,307 confirmed cases of the coronavirus in Africa as of Sunday, according to the Africa Centres for Disease Control and Prevention.

The global death toll from the novel coronavirus has exceeded 315,000, with more than 4.7 million confirmed cases and recoveries have surpassed 1.7 million, according to a running tally by Johns Hopkins University.