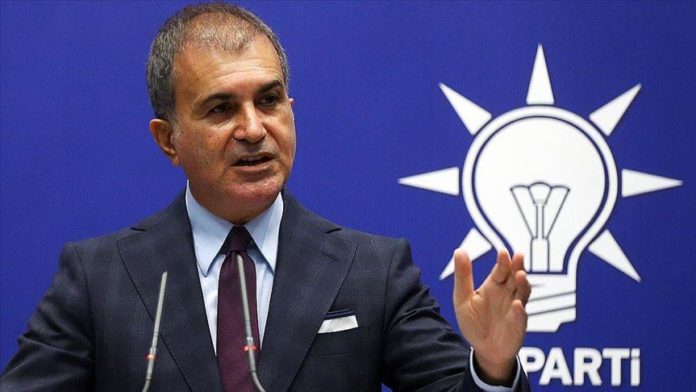 “Macron’s words provide ideological ammunition and logistics to organizations such as Daesh/ISIS,” Omer Celik told a news conference. “Consequently, what he is doing is threatening the peace of French society, too.”

Macron sparked outrage across the Muslim world by accusing French Muslims of “separatism” and describing Islam as “a religion in crisis.”

That coincided with the murder of a French teacher who showed blasphemous cartoons of the Prophet Muhammad to elementary school children in class. Macron paid tribute to the teacher, and said France would “not give up our cartoons.”

While calls for a boycott of French products circulate online in many states, Erdogan urged Turks “to never help French brands or buy them.”

On strained relations between Greece and Turkey in the Eastern Mediterranean, Celik said: “If Greece gives up on the policy of creating faits accomplis on the ground, it is always welcome for negotiations.”

Tensions have been running high for months in the Eastern Mediterranean, as Greece has disputed Turkey’s rights to energy exploration, making maximalist claims based on tiny Greek islands near the Turkish coast.

Turkey – the country with the longest coastline on the Mediterranean – sent drillships to explore for energy on its continental shelf, asserting its rights in the region as well as those of the Turkish Republic of Northern Cyprus.