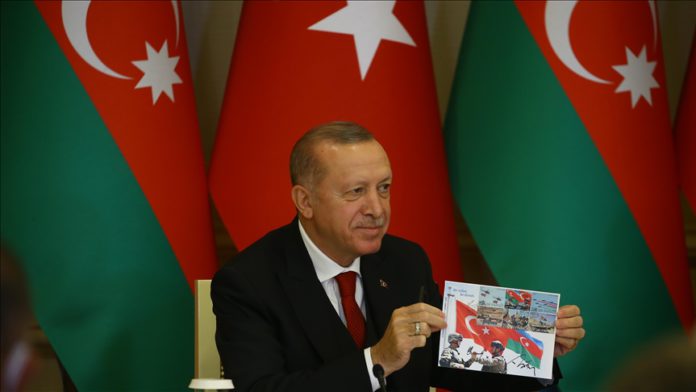 Speaking to reporters during his visit to Baku on Dec. 9-10, Erdogan said: “Perhaps, France will end Azerbaijan-France relations with the steps it has taken so far, apart from various agreements and so on. This is political inexperience.”

Referring to a recent motion passed by the French National Assembly which calls on the French government to recognize Nagorno-Karabakh — an internationally recognized Azerbaijani territory — as a separate republic, Erdogan said French President Emmanuel Macron, who is currently the president of the OSCE Minsk group, had no positive contribution to the process.

On Azerbaijan’s victory in Nagorno-Karabakh, Erdogan said it opened a new page in the history of Caucasians and the region’s history will be shaped in a new direction.

A six-party platform on Karabakh dispute that Turkey is working on will be a win-win initiative for all parties, the Turkish president said.

“If Armenia joins this process and takes positive steps, a new chapter could be opened in Turkey-Armenia relations,” he added.

“The US move to make Turkey confront an act called CAATSA [Countering America’s Adversaries Through Sanctions Act] is a disrespect against a very important partner in NATO,” Erdogan said, asking the reason behind such an action.