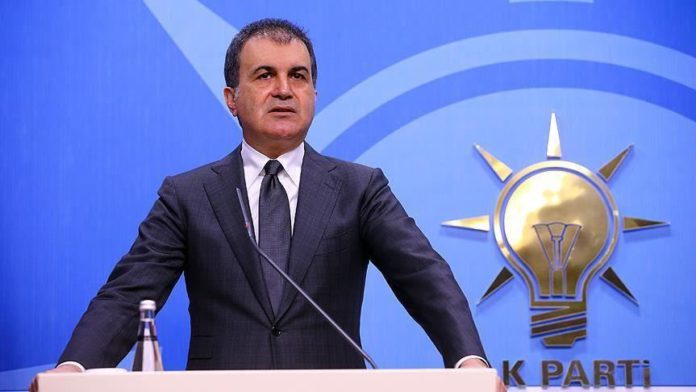 “Macron continues colonialism, while our President [Recep Tayyip Erdogan] continues to defend the interests of the oppressed peoples, protect the peace, and frustrate the colonialists’ games,” wrote Omer Celik, spokesman for the Justice and Development (AK) Party, in a series of Tweets.

Earlier today, ahead of a summit of EU Mediterranean states which excluded Turkey, Macron reportedly said: “We must be tough with the Turkish government and not with the Turkish people, who deserve more than the Erdogan government.”

On these remarks, Celik said: “This is an old and immoral game of the colonialists. They offered a false show of love to exploit the people, but targeted patriotic leaders.”

Celik added that he is proud “that the colonialist mentality targets our president.”

Referring to the atrocities discovered after the retreat of Libyan warlord Khalifa Haftar – supported by Macron – Celik said: “Macron is responsible for Haftar’s mass graves. Macron is now trying to play the colonial game in the Eastern Mediterranean using Greece.”

Turkey has supported the internationally recognized Libyan government formed after the 2011 ouster of Muammar Gaddafi, while Macron has supported Haftar, a warlord whose forces are now in retreat.

Celik added: “He is trying to carry the game he tried and ruined in Syria to the Mediterranean. He is targeting our president because he [Erdogan] won’t allow this aggression.”

Greece has disputed Turkey’s current energy exploration in the Eastern Mediterranean, trying to box in Turkish maritime territory based on small islands near the Turkish coast. Macron has supported Athens’ efforts to deprive Turkey of maritime jurisdiction.