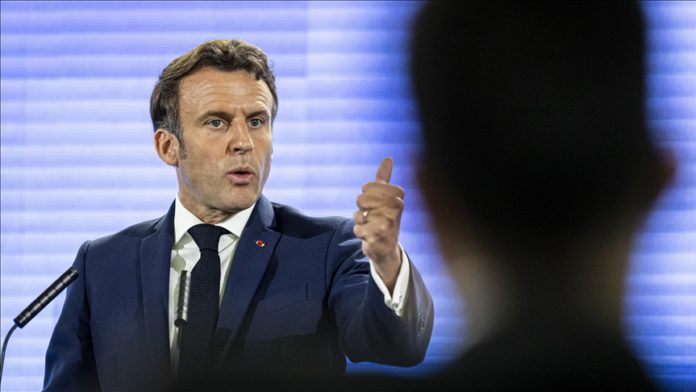 After facing a serious setback in France’s legislative elections, President Emmanuel Macron could use two options to try and maintain a parliamentary majority — form an alliance with opposition parties or dissolve the National Assembly and call for fresh elections, experts said Monday.

The official results at the end of the second round of the legislative polls led to a fragmented lower house of parliament. Macron’s Ensemble (Together) alliance came out in the lead with 245 seats but still fell short of the 289 required for an absolute majority. The left-wing New Ecological and Social Popular Union (NUPES) coalition got 131 seats and Marine Le Pen’s far-right National Rally party obtained 89.

In the given scenario of a relative majority, Macron will find it extremely difficult to pass key legislation to carry forward his government’s second-term agenda. The far right’s 89 lawmakers and the left’s 131 lawmakers can effectively block the ruling party’s bills like pension reforms. Both political movements have opposed Macron’s proposal to raise the pension age from 62 to 65.

Speaking to France Bleu news, political scientist Olivier Ihl, a professor at Sciences Po Grenoble, estimates that to overcome the “serious setback” Macron will “have to enter a whole new moment, which is that of coalitions.”

His views were echoed by Public Service Minister Stanislas Guerini, who told RTL news that Ensemble would have to be willing to form issue-based alliances with the left and socialist parties.

“What we want is to find a majority of general interest with those who want to move the country forward alongside us,” he said, adding the party can find majorities with NUPES, which is very heterogeneous, in the case of bills on which both political parties agree with.

Macron can also use Article 12 of the Constitution to proceed with a dissolution of the National Assembly, after which fresh elections must take place within 20-40 days.

“In the event that there is no majority, or that the majority is too random, nothing prohibits having dissolution at that time,” constitutionalist expert Didier Maus told CheckNews.

The legislative elections, which took place in two rounds on June 12 and June 19, came close on the heels of the presidential elections conducted on April 10 and April 24. Both polls were marred by a high abstention rate, which has become a regular feature of elections in France.

Experts fear that if fresh elections are announced now, election fatigue could lead to undesirable results.

“If the result (of the vote) is the same, it would be a terrible political setback,” Aida Manouguian, a doctor of public law, said in the CheckNews report.

For now, shocked with the results, Macron and Prime Minister Elisabeth Borne have refrained from making any statements on the way forward. In the aftermath of the disastrous results, newspapers in France summarized the mood of the ruling party on the front page with headlines like ‘The Slap’ by the Liberation daily, ‘Earthquake’ by Les Echoes and Le Figaro’s ‘To the test of an ungovernable France.’