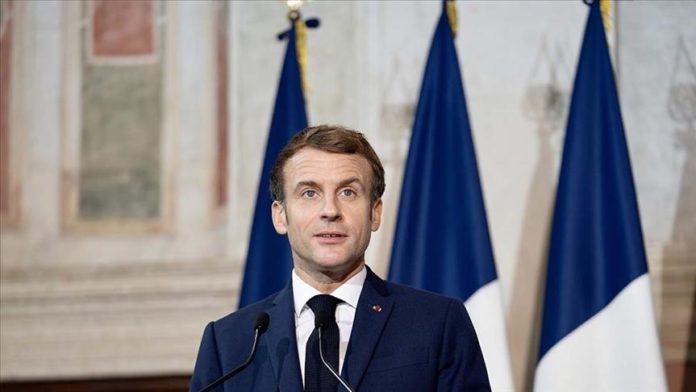 Russia and Ukraine will sit for talks in Berlin later this week along with Germany and France to discuss the implementation of a cease-fire and concrete political solutions to ongoing tensions, President Emmanuel Macron said Tuesday.

On the second leg of his marathon diplomacy in Kyiv, one day after talks in the Kremlin, Macron confirmed a new meeting under the existing Normandy format to take place Feb. 10 between diplomats from four countries to work on different political processes.

He said his visit to Kyiv and Moscow has helped “reinstate security and stability on our continent that is shaken by the current military build-up.”

Russia has deployed a large number of troops and military equipment on Ukraine’s borders, stirring fears of another invasion.

The threat emanates from Russia’s invasion of the Donbas region in eastern Ukraine and its annexation of the Crimean peninsula in 2014.

Macron said Russia has put pressure on the international community by adopting a threatening posture.

“Our will for the following weeks is to stabilize the situation, to re-engage by using new guarantee mechanisms for de-escalation. We have to resolutely implement the Minsk agreement and continue to have dialogue for the shared security and stability of our continent,” he noted in a joint news conference at the end of the meeting with his Ukrainian counterpart Volodymyr Zelensky.

Macron said the process of dialogue must “move forward independently of military pressure” and warned there is a “risk of escalation” as Moscow announced a naval drill in the Black Sea with six Russian warships.

He said he and Zelensky agreed they have a common vision of the threats posed to Ukraine’s and the world’s security.

He lauded the Ukrainians for facing the current “military aggression” with dignity and paid tribute to demonstrators and soldiers who fought to maintain democracy in 2014.

Macron said Putin and Zelensky have personally assured him of their willingness to implement the Minsk protocol.

“This shared determination is the only path that will allow us to find a durable political solution,” he said.

The foundation of the Minsk accords guarantees Ukraine’s territorial guarantee based on a shared Moscow and Kyiv’s commitment to move negotiations forward, he added.

Turkey collects over 6,150 cubic meters of mucilage from sea