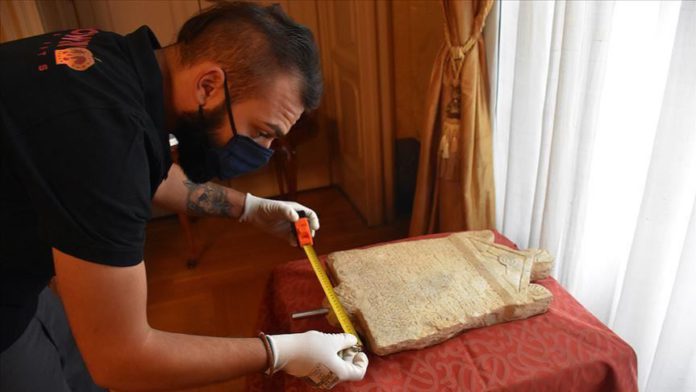 A 1,800-year-old Lydian era atonement inscription is preparing Tuesday to return to Turkey, where it was smuggled and later found in Italy.

The inscription depicts the regret of parents whose two sons committed theft and will be transported via a Turkish Airlines flight and arrive in Turkey by midnight Tuesday.

The historical inscription will be displayed at the Anatolian Civilizations Museum in Ankara.

It was seized in 1997 during a raid by an Italian anti-smuggling unit at an antiques merchant’s workplace.

Italian authorities reported the situation to Turkey on suspicion it might belong to the Lydians, an Anatolian civilization.

Turkey’s Culture and Tourism Ministry confirmed the inscription was smuggled from the Apollon Aksyros Temple in the ancient city of Saitta in Manisa province.

The ministry launched a long legal battle for the return of the inscription in 1998 and presented evidence that showed it was smuggled from Turkey.

But an Italian court ruled against Turkey in 2012 and Ankara appealed. A decision was suspended in 2013.

The Florence Court of Appeal ruled Nov. 5, 2019, that it belongs to Turkey, setting off a return process to Turkey.