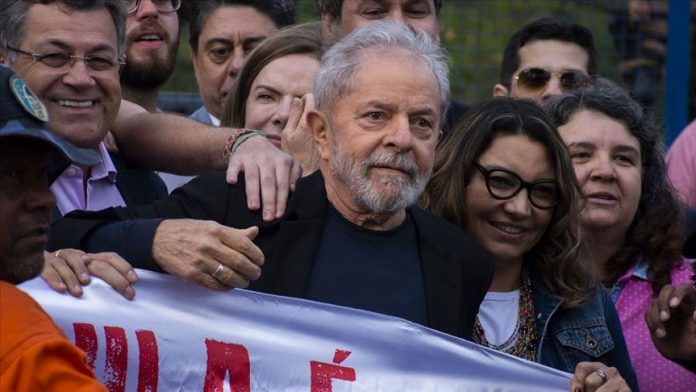 Brazil’s former president Lula da Silva, who was released from prison in early November pending appeals, said Thursday the current government of President Jair Bolsonaro is “worse” than his expectations.

“What frightens me the most is seeing that the Bolsonaro government is actually worse than the vision I had of it when I was behind bars,” Lula told Spanish daily El Pais in an interview.

“I think the way they are governing poses a great risk to Brazil,” he stressed.

He said that within the government, there are people “who don’t fully understand what a democracy is.”

Bolsonaro “does not appreciate democracy. Nor do his children, nor does his party,” Lula said.

“He has repeatedly talked about shutting down the Supreme Court, Congress, restoring AI-5 [the decree that sparked the worst repression during the dictatorship]. They’ve already drafted who knows how many decrees to authorize arms [possession].

“He thinks that everything can be fixed with armed people on the streets, when in truth, I believe that everything is solved with more technology, more education and more jobs,” Lula said.

“I feel that Brazil needs more democracy, more demonstrations, because that guarantees the consolidation of the institutions.”

Lula said the social unrest in other parts of Latin America had not yet affected Brazil as “it’s been such a short time since Bolsonaro was elected as president, and during the first year, people expect good things to happen.”

“This creates dissatisfaction, and as this feeling builds up, there will certainly start to be demonstrations.

“I don’t know why the current government is afraid of seeing the people on the streets,” he said. Bolsonaro “himself supported mobilizations against [former President Dilma] Rousseff, against the PT [Workers’ Party].”

Asked whether he can live with the fact that Bolsonaro is president, Lula said he does not need to like Bolsonaro to respect the institution of the presidency of the Republic.

The iconic leader of the Worker’s Party was serving a 12-year sentence since 2018 on corruption charges.

Lula, who ruled Brazil from 2003-2010, was set to run against Bolsonaro in an election last year but was blocked by then-judge Sergio Moro, who is now justice minister in the Bolsonaro government.

The 74-year-old Lula was leading in opinion polls in the run-up to the election, according to media reports.