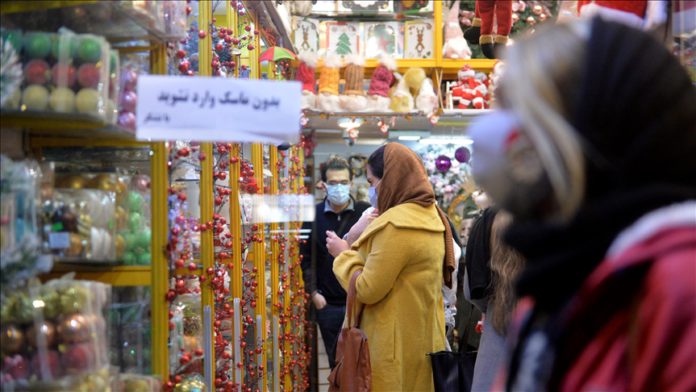 This year, the revelry associated with the festival in Iran has been dampened by the COVID-19 pandemic, forcing Iranian Christians to mark the occasion without traditional pomp and splendour.

Although the cases have dropped significantly in last few weeks, the government has been wary of lifting restrictions in this festive season.

Numbering around 500,000, majority of Christians in Iran are Armenians who have lived in the country for centuries. Others are Assyrians, Catholics, Protestants, and Evangelical Christians.

In the capital Tehran, Christians are mostly concentrated in downtown Majidiyeh neighborhood, close to one of the busiest intersections of the city — Vali Asr Square.

The neighborhood, which comes alive with colorful festivities around Christmas, is remarkably quiet this year. The celebrations have shifted from streets to homes.

Interestingly, Armenian Christians, who adhere to the oriental Orthodox branch of Christianity, mark Christmas on Jan. 6, as they believe the birth and baptism of Jesus happened that day.

Armenian Christians also occupy parts of central Isfahan and northern Tabriz provinces. In the Jolfa neighborhood of Isfahan, the highlight of Christmas celebrations have always been heavily decorated pine trees in the streets and glittering prayer mass in the iconic Vank Cathedral.

“Christmas has always been special as it reminds us of our roots and traditions,” Firouzeh, 27-year-old Christian trader from Jolfa, told Anadolu Agency. “But this year the pandemic has bereft us of festivities and fun on this occasion.”

He said a large number of Armenian Christians in different parts of the country flock to Isfahan for Christmas to relish “exquisitely traditional festivities” at Vank Cathedral, the most famous church in Iran.

Apart from Armenians, there are Assyrians who follow the Assyrian Church of East and are mostly found in northern provinces of Tabriz and Urmia.

In a unique tradition, the Christmas celebrations in Iran follow weeks of fasting by Christians. The period of fasting culminates with preparation of chicken stew in every Christian household called “harissa”.

Despite low-key celebrations, many shops and malls in Tehran, Isfahan and other major cities saw tremendous rush in last few weeks as shoppers looked for traditional Christmas merchandise, Christmas tree and Santa Claus, fondly referred to as “Baba Noel” by Iranians.

President Hassan Rouhani termed it “an auspicious occasion” for the followers of Jesus Christ, whom he hailed as “a prophet of peace, friendship and kindness.”

Parliament Speaker Baqer Qalibaf also extended his greetings on Christmas, saying he believes the “constructive interaction among divine religions will lead to realization of peace, justice and progress of human society.”

Foreign Minister Javad Zarif in his message termed Christmas as a “joyous occasion for all mankind”.