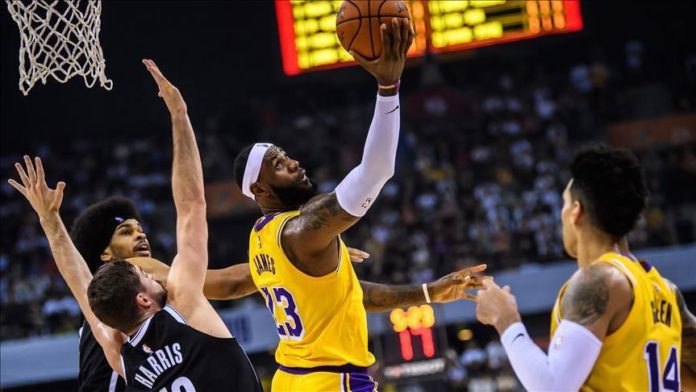 Los Angeles Lakers waited a long decade for an NBA championship as they crushed Miami Heat to capture their 17th NBA title.

Under coach Frank Vogel, they defeated Eastern Conference champions the Miami Heat to bag a 4-2 series victory, tying the Boston Celtics for the most titles in NBA with this victory.

Lakers’ 10-year wait for a title has come to an end after the joining of superstars to the squad.

The Los Angeles Lakers have been out of the championship race with their poor performance in recent years.

The Lakers that could not advance to the NBA playoffs since the 2012-13 campaign, experienced the worst period in their history with 65 defeats and 17 wins in 2015-2016.

The team strengthened their squad with significant transfers after they failed to meet expectations in previous seasons.

The LeBron James was transferred from Cleveland Cavaliers in 2018 and Anthony Davis joined the club from New Orleans Pelicans last season.

LeBron and Davis played a crucial role in victorious. The duo of Davis and James went down in the history of the club.

They are the first in nearly two decades due to finish first and second in postseason scoring — total points — in a postseason since Shaquille O’Neal and Kobe Bryant in 2002.

The power forward is also the first player in NBA history to be named Finals MVP with three different teams — the Miami Heat in 2012 and 2013 and Cleveland Cavaliers in 2016.

LeBron demanded respect for his achievements from fans during his MVP acceptance speech.

“We just want our respect. Rob wants his respect. Coach Vogel want his respect. Organization want their respect. And I want my damn respect too” he said.

The 35-year-old forward was delighted to bring the team a 17th championship.

“I told Jeanie — Lakers owner — when I came here that I was going to put this franchise back in a position where it belongs. Her late, great father did it for so many years and she just took it on after that,” James said.

“For me to be part of such a historical franchise is an unbelievable feeling, not only for myself, but for my team-mates, for the organization, for the coaches, for the trainers, everybody that’s here,” he added.

LeBron is one of five players in NBA history to lead his team in assists in the NBA Finals for at least four titles. The others were Bob Cousy, Kobe Bryant, Magic Johnson and Scottie Pippen.

Lakers coach Vogel said he has always believed in LeBron James, adding LeBron is the greatest basketball player in the universe.

“It’s just been a remarkable experience coaching him and seeing him take this group that was not in the playoffs last year, with a roster constructed overnight, and taking us to the promised land. I can’t say enough about him,” Vogel said on NBA.com.

The Los Angeles club completed the 2020 regular season with 52 wins and 19 losses at the top of the Western Conference.

The Lakers eliminated the Portland Trail Blazers (4-1), Houston Rockets (4-1) and Denver Nuggets (4-1) respectively to qualify for the final series.

The Los Angeles side dedicated the victory in remembrance of legendary player Kobe Bryant, who led the team to their last title in 2010.

The Lakers’ Anthony Davis, who scored 19 points and 15 rebounds in the game, stressed that they dedicated the win to Kobe.

“Ever since the tragedy, all we wanted to do was do it for him,” Davis said on NBA.com.

Kobe died at the age of 41 along with his 13-year-old daughter Gianna in a helicopter crash on Jan. 26 this year in California.

The Lakers clinched the third wire-to-wire NBA title in the last 50 seasons. They had achieved a similar feat in 1982 and were joined by the Boston Celtics in 1986.

The Lakers had the second-largest halftime lead in NBA finals history with 28 points over the runners-up in Game 6.