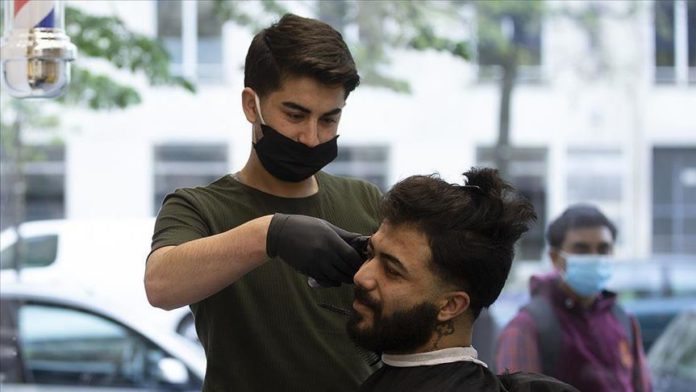 Hair salons and barber shops in Germany reopened on Monday as the country lifted some restrictions brought in to tackle the coronavirus pandemic.

Hatice Akyuz, a Turkish-German who has owned a hair salon in the capital Berlin for 18 years, told Anadolu Agency that she was happy to be back at the salon after six weeks of closure.

“We can’t make people wait inside. We can’t serve them drinks or give them magazines. The customer has to wash her own hair. We need to write down the name of all customers,” plus their contact information, she said, detailing the rules meant to allow lifting the restrictions.

Akyuz added that it would be difficult to wear face masks at work.

Gokmen Akguner, a barber shop owner in Berlin’s Moabit district, also expressed his pleasure to be back on the job.

“People are calling, I have customers waiting outside. We will work full time,” Akguner told Anadolu Agency.

Sasa Horvat, a customer, said: “I waited for today like it was Christmas. It was difficult to do my job with my long hair. Normally, I would get a haircut every two weeks.”

Easing of measures in Germany

Following a conference with state leaders on April 30, Chancellor Angela Merkel announced further easing of restrictions to deal with the virus.

However, she underlined that an existing ban on large public events, including sports events and cultural festivals, would remain in effect at least until the end of August.

Germany has the sixth-highest number of COVID-19 cases in the world, but it has managed to slow the virus’ spread in recent weeks, thanks to strict lockdown measures imposed in March.

The country’s daily virus death toll dropped to 43 on Monday, the lowest since March 25, according to the Robert Koch Institute, the federal government agency responsible for disease control and prevention.

Germany’s death toll reached 6,692, according to the institute, which uses official data submitted by federal states.

Over 3.52 million virus cases have been reported worldwide since first appearing in Wuhan, China last December, with the death toll surpassing 247,900 and more than 1.13 million recoveries, according to data compiled by Johns Hopkins University in the US.

* With writing and contributions by Iclal Turan