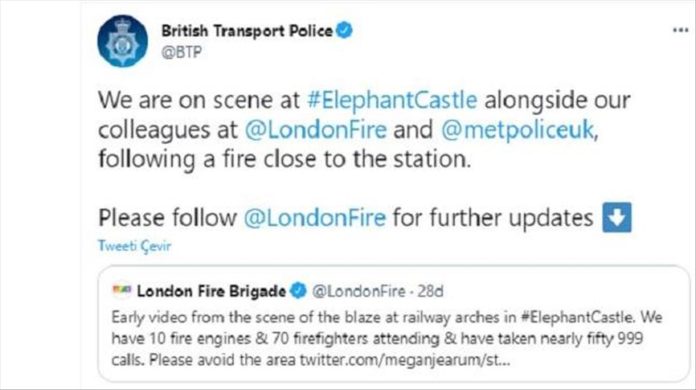 Facing a fire police said is apparently not terrorist related, hundreds of commuters were evacuated from a London Tube station Monday afternoon.

Confirming the blaze, London Fire Brigade (LFB) tweeted: “Ten fire engines and around 70 firefighters are attending a fire at railway arches near to #ElephantCastle railway station. Please avoid the area and close all doors and windows.”

A huge column of black smoke could be seen rising from the Elephant and Castle station, with some social media footage showing fire raging through the central London hub.

Thameslink, the main line route of the British railway system, also confirmed there was a fire next to the track at the station.

“All lines through Elephant & Castle are currently blocked. The fire brigade are assessing the situation,” they wrote on Twitter.

Major roads reaching the station have been closed off by the police and emergency services are at the scene.

Southwark Police confirmed that the incident was not believed to be terrorism related.

“Officers are supporting LFB in Elephant and Castle,” police said in a statement.

The force added: “There are significant road closures in place and the public are advised to avoid the area.

“The incident is not believed to be terror related.”