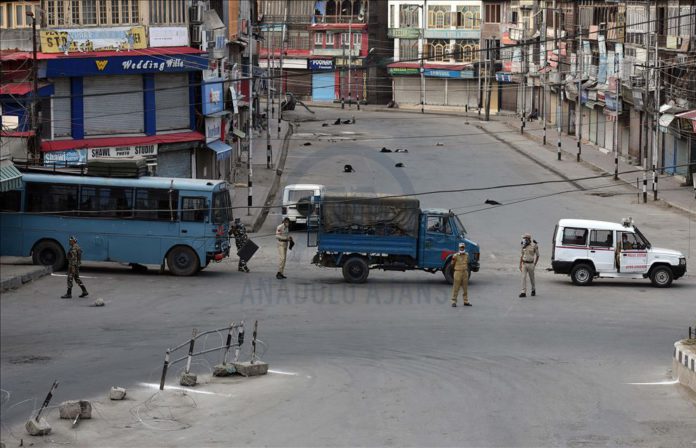 Authorities enforced a security lockdown and cut off internet access in Indian-administered Jammu and Kashmir on Saturday, fearing protests in the disputed region on India’s 74th Independence Day.

Mobile internet services were snapped and stringent security arrangements enforced in the early hours of the day to thwart any potential incident.

Official sources told Anadolu Agency that internet services were suspended as a precautionary measure and will be restored later in the day.

Streets in the region wore a deserted look on Saturday as people largely remained indoors amid heavy deployment of police and paramilitary troops.

The increased security presence came a day after two cops were killed and another injured in a militant attack.

Manoj Sinha, the recently appointed lieutenant governor of the region, presided over Independence Day celebrations at the Sher-i-Kashmir stadium in the capital Srinagar.

In his address, he said a new era of normalcy and development has dawned in Jammu and Kashmir with the changes enacted since the region’s special constitutional status was revoked on Aug. 5 last year.

He expressed his resolve to make “peace, progress, and social harmony an integral part of the transformed narrative.”

Sinha’s statement echoed Prime Minister Narendra Modi’s words earlier in the day, who hailed the start of “a new journey of development” in Indian-administered Jammu and Kashmir.

“A delimitation exercise is being carried out in Jammu and Kashmir and the entire country is committed to the completion of this work, so that elections can be held and the people can choose their representatives,” Modi said in his Independence Day speech.

‘Not acceptable to the people’

Mohammad Muneeb, a political science scholar in the region, told Anadolu Agency that the Indian administration’s steps over the past year “are not acceptable to the people of Jammu and Kashmir.”

“The ‘development’ that they are touting is clear for all to see. Businesses are gasping for survival, the economy is down, schools are shut, people have lost their jobs, and worse of all, people are dying due to the incessant violence and the COVID-19 pandemic,” he said.