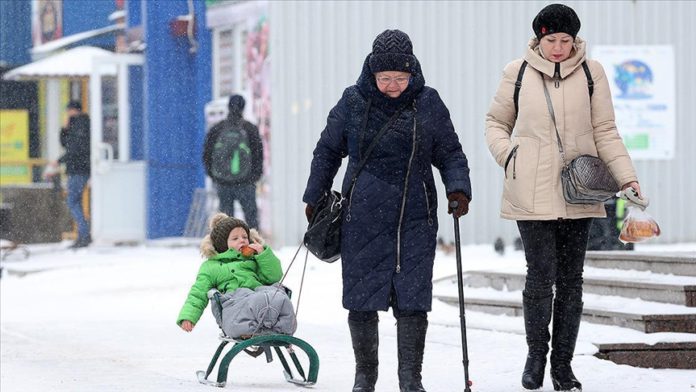 Locals in a city located north of the front line near Donetsk, the scene of clashes between pro-Russian separatists and the Ukrainian military, are hoping for peace.

Daily life continues as usual in Avdiyivka, one of the hottest spots near the conflicts that started in Ukraine’s eastern Donbas region in 2014.

To reach the city, which is 6 kilometers (3.7 miles) from the separatist-held city of Donetsk, one must pass through several checkpoints.

The city’s most important source of income, which bears traces of the conflict, is the nearby coking coal factory, which is currently operating.

Speaking to Anadolu Agency, Natalia, a local of the city who spoke without giving her full name, said she is worried and upset about the current conflict.

“I hope our people will come to an agreement in the near future. I don’t know if there will be war, but I don’t want one … I want peace for all,” she said.

Oleksiy, another local, said he believes some provocations and war activities in the area are possible.

Saying he has no plan for an emergency yet, Oleksiy said people in the area “will act according to the situation, go to the shelters and stay for a few days, maybe they’ll leave the city.”

Yevgenya, another local, said the tension has always been there.

Underlining that he has no plans for now if the situation changes, Yevgenya said, “I don’t intend to leave, but it’s a difficult situation to predict. We have to not panic but be prepared for every scenario.”

Kyiv and Moscow have been locked in a conflict since the war in eastern Ukraine broke out in 2014 after Russia illegally annexed the Crimean peninsula.

Russia also recently amassed tens of thousands of troops near Ukraine’s borders, prompting fears that Kremlin could be planning another military offensive against its ex-Soviet neighbor.

Moscow has denied it is preparing to invade and said its troops are there for exercises. Instead it has issued a list of security demands, including Ukraine not joining NATO, to calm the existing tensions.

Scientist warns of damage by intense mucilage in Turkey's Sea of...