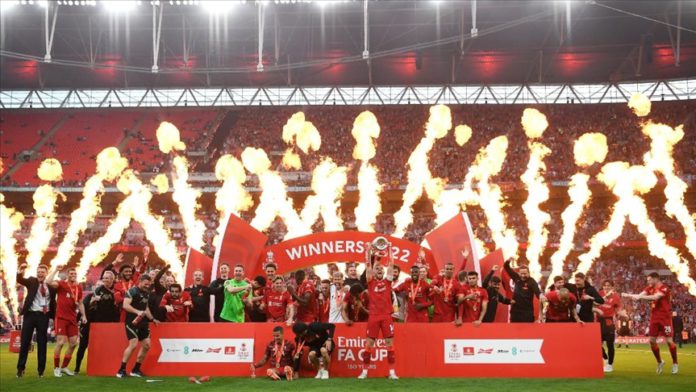 Liverpool were crowned the 2022 English FA Cup as they beat Chelsea 6-5 on penalties on Saturday.

The Reds won the Emirates FA Cup for the first time since 2006 and claimed it for the eighth time in history.

The full time in the final was 0-0. So the penalty shootout decided the winning team at London’s Wembley Stadium.

At Liverpool, Senegalese star Sadio Mane was the only Reds player to miss his team’s fifth penalty.

Liverpool may be anxious by Egyptian star Mohamed Salah’s injury in the final.

The 29-year-old winger left the match in the 33rd minute over an injury.

The Reds will face Spanish powerhouse Real Madrid in this season’s UEFA Champions League final on May 28 at Paris’ Stade de France.

The 2022 final will be a rematch of the 2018 Champions League final in Kyiv as Real Madrid beat Liverpool 3-1 to be the European champions. In that game, Salah suffered from a game-ending shoulder injury due to Sergio Ramos’ tackle.

In the 2021-22 English Premier League, second-place Liverpool are contending for the title as they are three points behind leaders, Manchester City, who have 89 points.

The Premier League will conclude in two match weeks.

Football broadcaster to pay for clubs for remedy