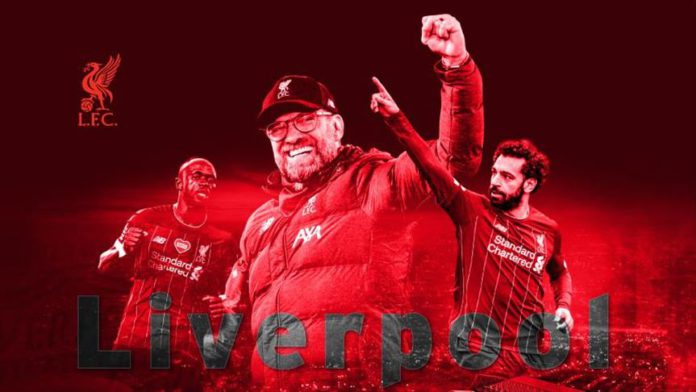 English giants Liverpool waited a 30-long year for a top-flight title as the Reds have been crowned champions of England after Chelsea defeated Manchester City 2-1 on Thursday’s game.

With this title, Liverpool had its 19th top-flight title since the 1989-90 campaign.

The Reds also earned the earliest Premier League title in the league history with a 23-point lead ahead of second-place Manchester City after playing just 31 matches.

In 2014, Liverpool missed out on the title by the team legend Steven Gerard’s mistake at Anfield Stadium.

Gerard’s slip allowed Senegalese forward Demba Ba to go on and score for Chelsea as the reds ended the season in the second spot with two points behind Manchester City who stood on top of the table with 86 points.

Another coming-up-short story for Liverpool happened last season, when they finished the season as the runners-up with 97 points and they recorded the highest second-place team points tally in league history.

Many achievements during 30 years

The Merseyside club had everything except a Premier League winners, including the 2005 and 2019 UEFA Champions League titles, three UEFA Super Cups, three FA Cup titles, four Football League Cups, and one UEFA Cup title in the 30-year drought.

During this period, several Liverpool legend achieved countless successes but they didn’t see a league title.
Jamie Carragher made 737 appearances for the Reds, clinching nine major trophies to include a Champions League in 2005 during his 16-year career at Anfield.

Steven Gerard who scored 186 goals and 131 assists in 710 games, had a Champions League title and a UEFA Cup title but Premier League success eluded him during his 17-year spell at the club.

Michael Owen who was the winner of Ballon D’or and two times top-scored with Liverpool had not a league title as he produced 158 goals and 32 assists in 297 appearances.

Under the helm of Bill Shankly, the Reds had a record of winning 21 home games in a row from January and December of 1972 but German manager Jürgen Klopp extended the team’s record to 23.

Reds also beat the Premier League record held by Manchester City, who won 20 consecutive matches in his stadium between 2011 and 2012.

Klopp, 53, joined the team in Oct.2015 as the Reds topped the European and international competitions with the team’s successes, including a UEFA Champions League, Super Cup, and FIFA Club World Cup.

The German coach had signed a new contract on Dec. 2019 with the English football club to head the team until 2024.

Also, Klopp, 53, became the first German coach to win the Premier League title in the history of England’s top-tier.

Meanwhile, some players were key parts of the team in the 2019-20 campaign.

Producing 17 goals and seven assists in 27 appearances at the EPL, Mohamed Salah played a crucial role in Liverpool’s league win.

Virgil van Dijk who was named the UEFA Men’s Player of the Year in 2019 also contributed to Liverpool in 31 games, adding four goals this season.

In addition to them, Senegalese winger Sadio Mane helped his team to score 15 goals and nine assists in 28 games.

The Dutch defender also bagged the UEFA Champions League Defender of the season in 2019.