TurkishPress
Home News 'Little Amal' to begin her walk from Turkey on July 27 for... 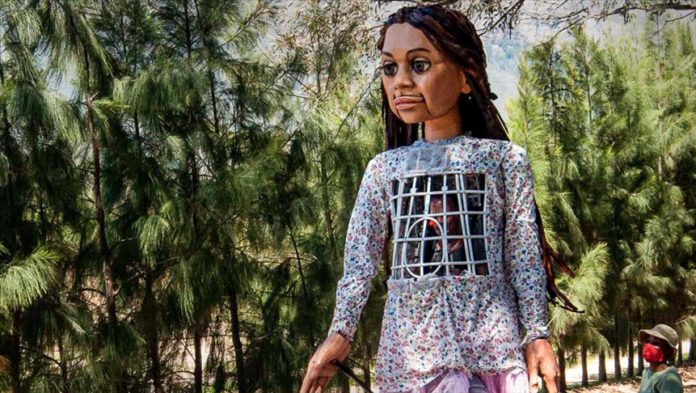 The journey of a 3.5-meter tall puppet en route to the UK prepared as part of a project titled “The Walk” that is sharing the life story of little Amal – a Syrian refugee at the age of nine – will begin in southeastern Gaziantep province of Turkey.

A virtual introductory meeting of the project was held on Wednesday.

The Walk is being prepared under the leadership of Good Chance, a UK-based theater and art company, and supported by Turkey’s Association of Solidarity with Asylum Seekers and Migrants (SGDD-ASAM) along with the Istanbul Foundation for Culture and Arts (IKSV) and the project’s envoys, Turkish actress Berguzer Korel and actor Halit Ergenc.

Little Amal’s puppet will travel 8,000 kilometers (4,971 miles) through eight countries in search of her mother, drawing attention to the challenges she faced.

Symbolizing millions of displaced refugee children, the 3.5-meter high puppet will travel from Gaziantep, located near the Turkish-Syrian borderline, to Manchester.

The Walk will take place between July 27 and November 3, and settlements along the route will be visited by artists and NGOs hosting culture and art events for the public.

According to Amir Nizar Zuabi, the art director of the project, the journey is an ambitious traveling arts and culture festival.

The Little Amal’s journey from Gaziantep to Manchester will cover a distance of 8,000 kilometers (4,971 miles), stopping in 65 cities and participating in over 120 events, Zuanbi said, adding that the project aimed to bring a new perspective to the issue of refugees and reshape existing perceptions.

He stressed that refugees contributed to their host countries by enriching their culture and language.

Noting that the European perception of the refugee crisis was related to its start in Greek borders, he said events were unfolding prior to refugees’ arrival in the EU zone, and that the latest crisis in this regard could be scaled with Syria and its neighbors.

He said it is significant that the project begins its journey in Turkey, the world’s top refugee-hosting country with over 3.6 million displaced Syrians, and that the project is like a show an 8,000-kilometer stage that will grow with the experiences gained along the way.

SGDD-ASAM General Coordinator Ibrahim Vurgun Kavlak said two people on average are displaced across the world every second and children are among the most vulnerable of the migrant community.

“Children account for 30% of the world’s population and 42% of those who have been forcibly displaced. From 2018 to 2020, nearly a million children were born as refugees,” he said and added that people, wary of reasons such as conflicts and poverty, embarked on journeys of hope and risked their lives in the Mediterranean in search of a better life.

“Therefore, the walk of Little Amal is going to be one of the best organizations’ representing the condition these (refugee) children are exposed to.”

IKSV Deputy Director Manage Yesim Oymak said hundreds of thousands of people are forcibly displaced due to a number of factors including war, drought, and environmental reasons, and they hit the road while risking great suffering.

Her organization is taking part in the project for the sake of humanitarian perspective towards refugees and children in particular, she added.