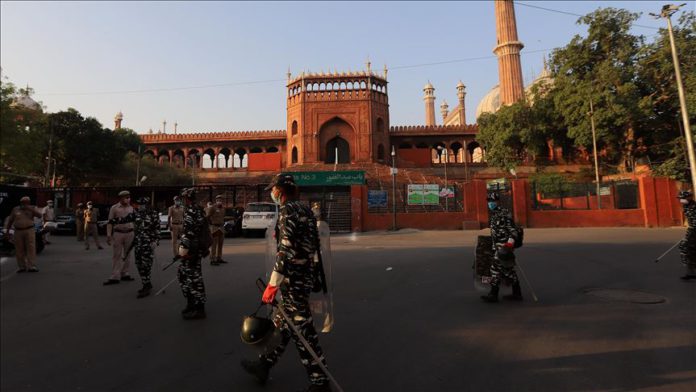 Indian military experts say there was a link between China’s mishandling of the COVID-19 pandemic and its latest military incursions into the Ladakh region, resulting in a face-off between the armies.

“Globally, China is losing its leverage as it is believed to have caused the pandemic. Industries are looking to move out of China. This is causing China to divert attention from the COVID-19 situation,” Lt. Gen. Vinod Bhatia, India’s former director-general of military operations (DGMO), told Anadolu Agency.

He said the post-COVID world will be a big opportunity for India, as the fulcrum of power will shift from West to East.

The border skirmishes, which started on May 5, at the Galwan Valley in the high-altitude Ladakh region in the north, and then at the Nathu La mountain pass in northeastern Sikkim three days later, have led to a military and diplomatic impasse between the two countries.

Thousands of soldiers on both sides are camping along the un-demarcated Line of Actual Control (LAC).

India and China have running boundary feuds which flare up quite often and have been discussed at the diplomatic level over the past seven decades. In 1962, the countries fought what is called the Sino-Indian War.

Experts believe that that the current boundary impasse may not resolve as easily as the previous ones that cropped up at Depsang in 2013, Chumur in 2014, and Doklam in 2017.

“This issue is a long haul. Military-to-military talks have not been successful, diplomats are now discussing the issue. We cannot rule out that the politicians may have to get involved,” said retired Gen. Ved Prakash Malik, the former army chief who led Indian forces during the 1999 Kargil War.

He said that India’s joining the global outcry to investigate the origin of coronavirus and then the construction of a military post on its side of the LAC triggered the incident.

By 2022, India plans to build 66 roads along the China border and upgrade its infrastructure.

The former army chief said that the promotion of China’s dream by President Xi Jinping, where he wants to make China a superpower both military and economy-wise may have aggravated the incursion.

“Isolated incidents have occurred in the past because of an undefined grey area at the LAC. This time, however, it is different as the Chinese soldiers have dug-in and sat down at various disputed areas,” said Malik.

On Tuesday, the Chinese president asked its military to be prepared for the war.

“Transgressions are a normal occurrence, with about 350 occurring every year. But what is different this time is their simultaneous intensity, scope, and the nature of the activity. Hence the ongoing incursions are a cause of some concern. Early indicators show that PLA [People’s Liberation Army] is preparing for a long haul,” said Lt. Gen. Bhatia.

In 2017, both the armies were locked in a 73-day long stand-off in the disputed Doklam plateau near India’s northeastern state of Sikkim, regarding the building of a road by the Chinese. Codenamed Operation Juniper, about 270 Indian troops armed with weapons and two bulldozers crossed the Sikkim border into Doklam to stop the Chinese from constructing the road.

The stand-off had ended after the withdrawal of troops by both sides.

Modi and Xi held their first informal summit in April 2018 in the Chinese city of Wuhan, months after the Doklam standoff. The two leaders had decided to issue guidelines to their militaries to strengthen communications.

“China respects strength, India will do well to follow the concept of no blinking, no brinkmanship, standing firm on the ground and exploiting the established mechanisms of flag meetings,” said former DGMO.

Stressing that at the strategic domain, the present standoff may continue longer as part of China’s three warfare philosophies, Bhatia hoped that China may not likely to risk any escalation. He said a continued peace and tranquility is as much in China’s interests as in India’s.

However, he said, India should be prepared to face threats emanating from China’s non-contact warfare strategy, possibly in the Cyber domain.

On May 27, US President Donald Trump tweeted that he was ready, willing, and able to mediate or arbitrate their now raging border dispute. Both sides have, however, rejected the offer.

Chinese Foreign Ministry spokesman Zhao Lijian said the two countries did not want the “intervention” from a third party to resolve their differences. Indian Foreign Secretary Harsh Vardhan Shringla said his country is “engaged with the Chinese side to peacefully resolve this issue.” He said Indian troops have taken a responsible approach towards border management and are following protocols.