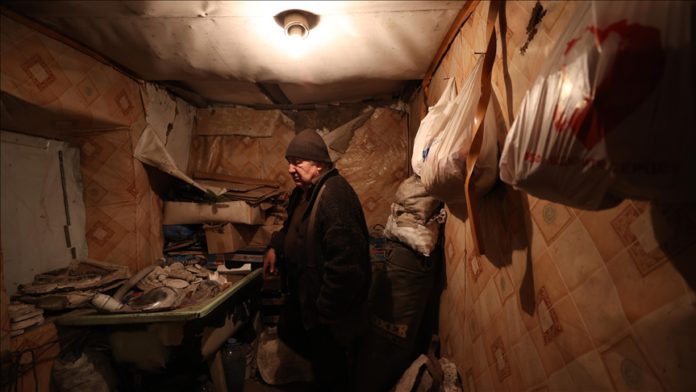 Since 2014, under the shadow of war, an octogenarian ex-schoolteacher who lives in a roofless house near the line of contact in eastern Ukraine has clung with all his might to the house he once shared with his wife.

Oleksandr Panov, 80, lives in Avdiivka, a city in Ukraine’s Donetsk Oblast, once known as a “city of ghosts” as so many residents fled their homes due to shelling between pro-Russian separatist groups and Ukrainian government forces.

The city, with a population of some 30,000 people, is less than 15 kilometers (9 miles) far from the line of contact in the conflict-ridden eastern Donbas region, the line between areas controlled by Ukraine and places under the control of Russian-backed separatists.

The clashes started on May 26, 2014, when the Donetsk Airport was bombed, he recalled, adding that the first bombs started falling on the area he lives in that June.

Despite the house’s windows being broken several times due to the conflict, Panov said they got used to the sound of gunfire.

“I repaired my windows twice. When they were broken for the third time, I blocked them off,” he said.

“And only last year I opened two windows again. I found some glass pieces and repaired it. The windows were closed for seven years, I hadn’t opened them since then because soldiers were stationed just opposite (the house).”

He added that many people left the area he lives in, leaving just four neighbors, including himself, living regularly in the surrounding area.

Panov said that transportation in the region stopped in 2014-2015, with bus service only slowly resuming around the end of 2016.

Then shops also started reopening in the area, he added.

Telling how part of the roof of his house was damaged by the bombs of pro-Russian separatists in January 2017, Panov said then the roof completely collapsed due to another bomb hitting his house a second time just a week later.

With a tent provided by the city government, he managed somehow to cover the roof, but the house remains very cold in winter and so he has to keep the coal stove going night and day.

“If I don’t keep the coal stove going, even the water in the house freezes,” he said.

The former schoolteacher, who suffers from a host of illnesses, said that during the conflict he used to meet his water needs from a well near his house.

Panov lost his wife last year, and since then lives alone in his barely standing house full of books.

Emphasizing that his two children live in separatist-controlled Donetsk, Panov said that he can only talk to them over the phone about three times a year due to communications problems in the region.

“There are no blasts, no war anymore. Everything got better now compared to what was here before,” he said of recent years where he lives.

Panov, who is originally from Siberia, said that he moved to Donbas and “bought this house in 2005 and I’ve been living here ever since.”

Panov retired at age 75 after working for 46 years in state institutions and the 10 years just before his retirement in 2017 in the private sector.

Asked his thoughts on the recent tensions in the region, which many fear might lead to Russian invasion and war, Panov said he is “no prophet,” and so can’t tell the future, but made clear that he does not want war.

Kyiv and Moscow have been locked in a conflict since hostilities in Donbas, eastern Ukraine broke out in 2014 after Russia illegally annexed the Crimean peninsula.

Russia also recently amassed tens of thousands of troops near Ukraine’s borders, prompting fears that Kremlin could be planning another military offensive against its ex-Soviet neighbor.