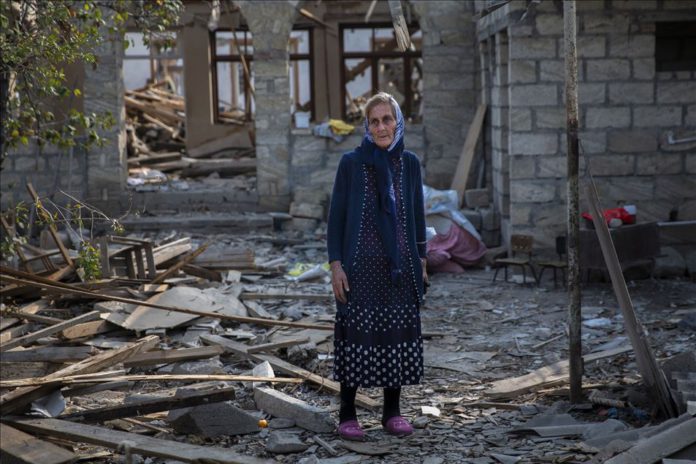 Reeling from a devastating attack by Armenian forces, the residents of Azerbaijan’s city of Ganja are combing the rubble of their demolished houses to retrieve whatever left intact.

People in the city, which was attacked by the Armenian army on Oct. 17 with mid-range ballistic missiles killing 26 civilians, are trying to repair their houses as life limps back to normalcy after substantial gains by Azerbaijani forces.

GANJA, AZERBAIJAN – NOVEMBER 02: Ragibe Guliyeva, the grandmother of 13-year-old Russian citizen Artur Mayakov, who died in the attacks is seen clearing the remains of her house in Azerbaijan’s Ganja on November 02, 2020. In Azerbaijan’s second-largest city Ganja, people were collecting their usable belongings and trying to repair their houses following a medium-range ballistic missile attack, allegedly carried out by the Armenian army on October 17 and killed 26 civilians, in border clashes between Azerbaijan, Armenia. ( Arif Hüdaverdi Yaman – Anadolu Agency )

Hanging Azerbaijani flags over their destroyed houses, people of Ganja pass time by collecting fruits in their gardens and searching for their belongings under the rubble.

Shaira Guliyeva, aunt of 13-year-old Russian origin Arthur Mayakov who was killed in the attack, said: “He had dreams. He wanted to live well.”

Guliyeva said she is living with the pain of Arthur’s death, adding they experienced the battle firsthand which they had only seen in TV series before.

“Why is the world silent?” she asked, noting she would not leave her home.

Hijran Guliyeva, another resident, said they were not home when the attack took place and thanked Azerbaijan and Turkey for protecting them.

“Such things do not scare us. Let our lands be free, then everything will be fine,” she said.

A 67-year-old woman, Ragiba Guliyeva, whose house was also destroyed, said her grandchild was killed in the attacks.

“I was home when they attacked us at night. Stones and debris fell on me, and everywhere lit bright,” she recalled.

Guliyeva said she got well after receiving treatment at a hospital, however, her daughter is still under treatment.

She also wished for the liberation of Nagorno-Karabakh, or Upper Karabakh.

“Let them take Nagorno-Karabakh first and everything will become calm,” she said, thanking the Turkish nation and President Recep Tayyip Erdogan for their support.

Posing for cameras with a Turkish flag covering him, 9-year-old Huseyin Gulizade said: “Nagorno-Karabakh is Azerbaijan’s.”

To date, at least 92 civilians have lost their lives, including 11 children and infants, and over 400 people, with at least 36 children among them, have been injured in attacks by Armenian forces, according to the Azerbaijan’s Chief Prosecutor’s Office.

Some 2,971 homes and 100 multi-apartment residential buildings have been destroyed and 502 civilian facilities damaged, as well.