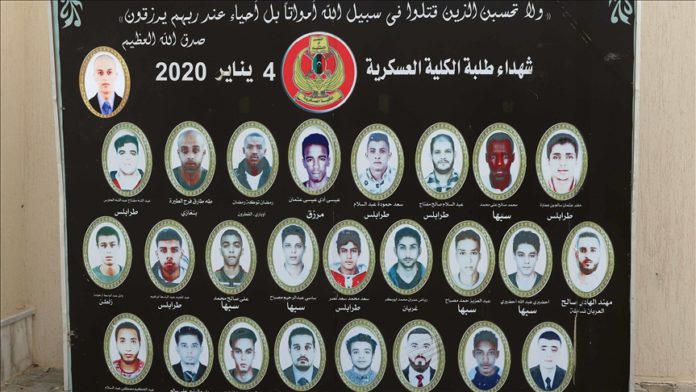 It has been a year since the United Arab Emirates (UAE), a supporter of Libyan strongman Khalifa Haftar, carried out a drone attack on a military school in the capital Tripoli, in which 26 young cadets were killed.

On Jan. 4, 2020, some 26 unarmed Libyan cadets, mostly under the age of 20, were massacred in the UAE drone attack during a routine military training in the courtyard of the Al-Hadba Military Academy south of Tripoli.

“There were meters between us and the place hit by the missile. When we went out to the courtyard, we encountered a terrible sight. It was incredibly terrifying to see missiles fired on 30 unarmed students,”, military officer Ahmed al-Rajhi, who witnessed the massacre, told Anadolu Agency.

“Some of the students had just started school 1-2 days ago. They were all well-behaved young people”, al-Rajhi said.

The Libyan officer was one of the hundreds of military academy students who got training in Turkey as part of a pact on military and security cooperation signed between Ankara and Libya’s UN-recognized Government of National Accord (GNA) on Nov. 27, 2019.

“After about six months of this brutal attack, we were sent to Turkey by the Military Academy to get commando training in Isparta province,” al-Rajhi said.

“The training staff in Isparta welcomed us very warmly. We were like brothers with them. We received a very high quality training from them”, he added.

Hours after the attack, one of Haftar’s commanders, Khalid al-Mahjoub, told a local television that they received information that “the militia groups affiliated with tribes” were receiving training at the academy.

After images of the slain young students circulated on social media and sparked international outrage, Khalifa Haftar’s spokesman Ahmad al-Mismari claimed that Daesh/ISIS terror group was behind the attack.

The Government of National Accord (GNA) was founded in 2015 under a UN-led agreement, but efforts for a long-term political settlement failed due to a military offensive by forces loyal to strongman Khalifa Haftar.

The UN recognizes the government headed by Prime Minister Fayez al-Sarraj, also supported by Turkey, as the country’s legitimate authority as Tripoli has battled Haftar’s militias since April 2019 in a conflict that has claimed thousands of lives.

Diplomatic efforts have been underway in recent months to reach a solution to the Libyan conflict following victories made by the Libyan Army against Haftar’s militias.